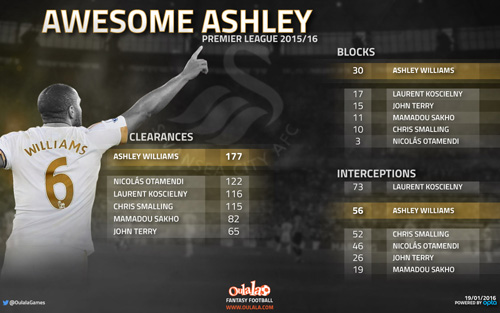 Ashley Williams proved that he still has a lot of fight left in him, producing an inspired performance and scoring the only goal in their 1-0 victory against Watford on Monday night.

Should Swansea be relegated, no doubt 31-year-old Williams could play for some of the Premier League’s top sides.

Fantasy football game www.oulala.com’s have taken a look at the Welshman’s stats this season and compared them to centre-halves from the likes of Manchester United, Manchester City, Liverpool and Chelsea.

Williams has made 30 defensive blocks, 13 higher than second place Laurent Koscielny of Arsenal. Indeed along with Scott Dann of Crystal Palace, Williams has the highest amount of blocks in the entire league.

Oulala’s list shows that Swansea’s star man also comes out top in terms of clearances made with an impressive 177. Of that number, 13 were made in Swansea’s 1-0 victory against Watford on Monday night. Williams has the second highest amount of clearances in the whole league and is pipped to the post by Sebastien Bassong of Norwich City with 189.

The Welshman has racked up a total 56 interceptions, beating the likes of John Terry and Chris Smalling on our list with 26 and 52 respectively. However, this time Koscielny comes out on top with 73 interceptions made.

Swansea’s win on Monday night was their first in four matches. It meant that they move out of the relegation zone by one point. However, if Swansea fail to secure Premier League status for next season, then ever loyal servants such as Williams may jump ship.

In the past few seasons, Williams has sparked interest from Liverpool, Everton and Arsenal.