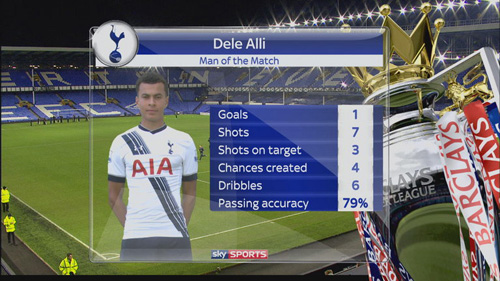 Dele Alli could make his first appearance in the FA Cup for Tottenham Hotspur against Leicester City on Sunday.

The England international is in stunning form ahead of their visit of the Foxes after his match-saving performance at Goodison Park on Sunday afternoon.

Alli scored Tottenham’s equaliser in a 1-1 draw with Everton after the 19-year-old showed superb composure to guide a finish past Toffees shot stopper Tim Howard.

And the Sky Sports infographic above highlights just how good Alli was for Mauricio Pochettino’s side against Everton.

The newly-fledged England midfielder scored one goal but had seven shots, three of which were on target, whilst he created four chances for his team-mates.

Alli has already scored five times and has made three assists in 17 Premier League games for Tottenham following his £5m summer move to White Hart Lane from League One side MK Dons.

Tottenham face Leicester in the FA Cup before hosting the Foxes again in the Premier League days later.