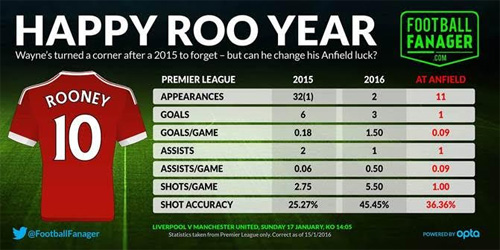 Wayne Rooney’s form has dramatically improved since the turn of the year.

But this infographic by leading fantasy football site Football Fanager shows that he faces a tough task on Sunday as his Manchester United side play Liverpool.

The England captain only scored six league goals in the entirety of 2015, but has half of that amount in just two games since 1 January.

After scoring twice in a man-of-the-match performance in a 3-3 draw with Newcastle United at St James’s Park on Tuesday night, Rooney appears to be recapturing the form that once made him one of the most feared strikers in world football.

However on Sunday, Rooney visits one of his least favourite hunting grounds for a feisty north-west derby.

The 30-year-old has only scored one goal in 11 games at Anfield since moving to Old Trafford from Liverpool’s bitter rivals Everton in 2004.

With Liverpool’s makeshift defence leaking goals, will he continue his goal scoring run and put the Reds to the sword at Anfield?