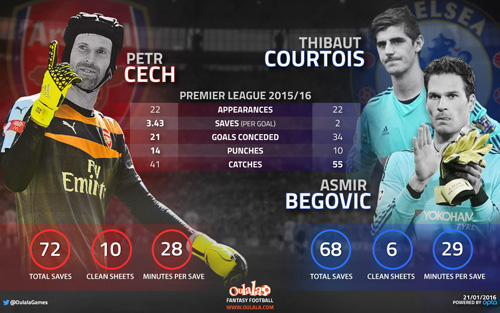 Petr Cech faces his former side Chelsea for the third time this term on Sunday after having fallen out-of favour at Stamford Bridge last season.

Did Chelsea do the right thing letting him join Arsenal or should they have kept him for another few years?

We have taken an extensive look at Cech’s stats this season and compared them to Chelsea’s current first and second-choice goalkeepers in Thibaut Courtois and Asmir Begovic.

However, at the end of the 2014/15 season, he dropped down the pecking order and was replaced by Belgium number one Thibaut Courtois. That season Cech made just seven appearances for Chelsea before making his £10m move away to Arsenal.

Now at 33, Cech is having a sublime season with the Gunners and finds his team leading the Premier League title race.

In rather contrasting fortunes, despite a recent resurgence, Chelsea have had an overall abysmal season and find themselves still just four points above the relegation places.

Collectively Courtois and Begovic have collected six clean sheets in 22 appearances. On the other hand, Cech has 10 clean sheets under his belt, putting him joint first in the Premier League with Joe Hart of Manchester City.

No doubt this is also down to how good Arsenal’s defence has been. However, this is not to say that Cech has not been busy.

Arsenal’s number one has made an impressive 72 saves in 22 appearances. Courtois and Begovic have made 21 and 34 saves respectively making for a total of 68.

Oulala’s stats show that the Chelsea custodians have an average of 29 minutes per save, whereas Cech has an average of 28. The Czech number one has conceded 21 goals or 0.95 per game.

The only area where both Chelsea keepers come out on top collectively is in catches made (55 to 41).

In terms of punches made, Cech once again has the edge making 14 punches to Courtois’ and Begovic’s total of 10.

Cech’s first game against Chelsea came at the very start of the season in a dull 1-0 Community Shield victory for Arsenal.

His first Premier League encounter against the Blues came at Stamford Bridge. Cech received a warm welcome but the game ended 2-0 in favour of the home side.

Can Cech continue his fine form on Sunday and help his side to victory against his predecessors?