These numbers do not make good reading for Chelsea ahead of their trip to Arsenal on Sunday... 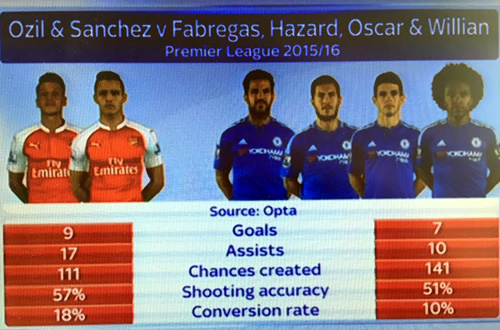 It is no secret that Mesut Ozil and Alexis Sanchez have been in fine form for Arsenal this season.

However, these stats show just how crucial the talismanic duo have been for Arsenal’s Premier League title bid.

Ozil has been in superb form this season, having notched up 16 assists and scored three goals in the top flight for Arsene Wenger’s men to help them top the Premier League table.

Sanchez, despite having been out injured since late November, has also been a central figure for the Gunners.

The Arsenal pair have scored more goals and created more assists than their Chelsea counterparts, and have also enjoyed a higher shooting accuracy and conversion rate.

The numbers do not make good reading for Chelsea as they head into Sunday’s showdown with Arsenal at Emirates Stadium.