Stats highlight how Liverpool can beat Arsenal at Anfield 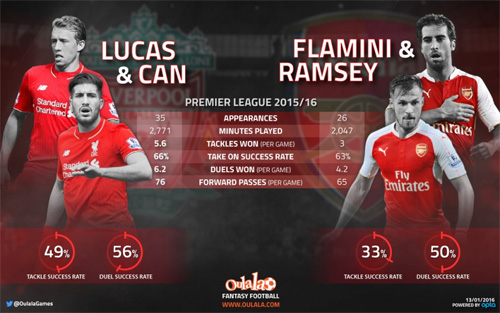 The midfield battle will be key at Anfield on Wednesday night Photo: www.oulala.com

Jürgen Klopp has admitted than Liverpool cannot compete with Arsenal if they try to match Arsene Wenger’s possession-based game-plan.

The Premier League leaders go to Anfield tonight as they continue their pursuit of claiming a first league title for 12 years.

However, Klopp has suggested that Liverpool will have to adopt a more defensive approach, as they did in their impressive 1-0 away win over Stoke City in the Capital One Cup semi-final last week, to claim all three points.

Fantasy football game www.oulala.com’s have analysed both sides and have revealed some underlying stats that suggest if Liverpool are to beat Arsenal, the midfield battle will be crucial.

Our stats shows that Reds midfield pair, Lucas Leiva and Emre Can, have outperformed Arsenal duo, Mathieu Flamini and Aaron Ramsey, in a host of key areas this season.

It appears Arsenal are undoubtedly missing the injured Francis Coquelin and Santi Cazorla from the heart of their midfield.

With both out with respective knee injuries and unlikely to return until March, Jürgen Klopp will look to Lucas Leiva and Emre Can to provide the steel that Liverpool will need to overcome Arsene Wenger’s side this evening.

Photo: Mamadou Sakho all smiles with Alberto Moreno ahead of Liverpool v Arsenal