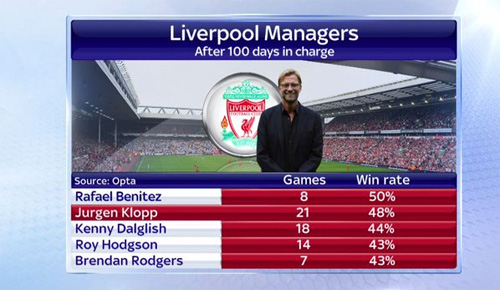 Jurgen Klopp has made a solid if unspectacular start to his Liverpool reign.

The 48-year-old’s best moments in charge of the Reds came at Chelsea and Manchester City when Liverpool secured impressive 3-1 and 4-1 away Premier League victories at Stamford Bridge and the Etihad Stadium.

However, Klopp endured a frustrating 2-1 loss to Crystal Palace at Anfield in November, as well as humbling defeats away at Watford and West Ham United.

But the former Borussia Dortmund manager, who replaced Brendan Rodgers in October, can take solace from the above infographic which shows his record after 100 days his only marginally worse than Rafael Benitez.

The Reds are currently in ninth place in the Premier League table after Wednesday night’s 3-3 draw with leaders Arsenal at Anfield.

More: Stats show Rooney is back to his best

The Reds have lost their last four games against the Red Devils.