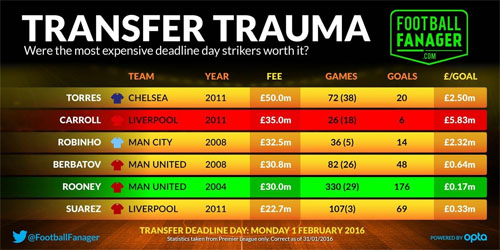 Panic buy Carroll, who moved to Liverpool on deadline day in January 2011, cost the Reds a staggering £5.83m a goal as he only scored six times in the league after his transfer from Newcastle.

At the other end of the scale, Wayne Rooney is the smartest piece of deadline day dealing. The Man United striker is valued at just £0.17m a goal since his move to Old Trafford, and is the only player on the list still at their respective club.

Liverpool told they can sign Alex Teixeira for £53m – report