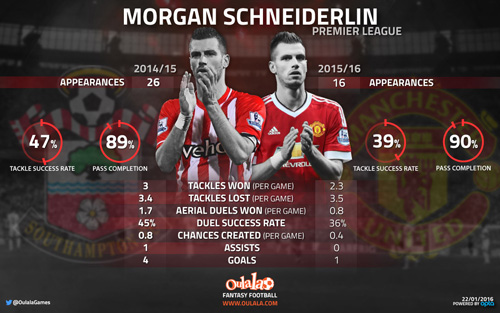 Morgan Schneiderlin spent seven years at Southampton, helping the Saints climb from the depths of League One to the heights of the Premier League.

In turn, he established himself as one of English football’s most-coveted midfielders. This inevitably led to a big-money move as the Frenchman swapped the Saints for a reported £25m switch to Manchester United last summer.

Fantasy football game www.oulala.com’s have taken a look at Morgan Schneiderlin’s stats for his new side since his move and have compared then against his numbers at Southampton in his final year to see how the Frenchman has measured up since the switch.

Schneiderlin has made 16 Premier League appearances for United, compared to 26 last season at the Saints. The analysis has been made on a per game and percentage basis.

This season at Manchester United, Schneiderlin has dropped in the Premier League tackle rankings to 33rd, registering 2.25 successful tackles per game.

As a result, the midfielder’s tackle success rate has dropped from 47 per cent to 39 per cent.

Schneiderlin’s form has also suffered aerially this season. At Southampton, he won an average of 1.7 aerial duels per game last season at a success rate of 49 per cent. Whereas at Manchester United, the Frenchman is averaging just 0.8 with a success rate of 45 per cent.

Overall, Schneiderlin’s duel success rate has fallen from 45 per cent to just 36 per cent.

The stats also show that the 26-year-old is suffering creatively too. Schneiderlin is creating an average of just 0.4 chances per game at United.

In contrast, he was creating an average of 0.8 chances per match for Southampton. He is still yet to register a Premier League assist for his new side.

An area of the midfielder’s game that has improved is his passing, albeit narrowly. He is up from an 89 per cent pass completion rate to 90 per cent.

With Bastian Schweinsteiger and Michael Carrick doubts for the game, it will be up to the former Saint to marshal the Manchester United midfield as his new club continue their pursuit of league leaders Arsenal.