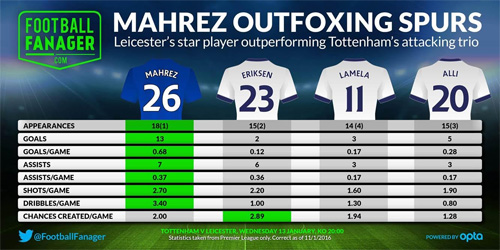 Leicester’s ascent to the top of the table this season has been spearheaded by playmaker Riyad Mahrez.

The Algeria international has been linked with a move to Arsenal, Chelsea and Manchester United following a return of 13 goals and seven assists in 19 Premier League games so far this season.

And as this infographic by leading fantasy football site Football Fanager shows that he is outperforming Tottenham’s trio of attacking midfielders in almost every category.

Christian Eriksen, Erik Lamela and Dele Alli have all enjoyed stellar seasons as Tottenham have launched a title bid of their own, but they can’t come close to the exploits of the 24-year-old Mahrez.

Spurs and Leicester go head-to-head at White Hart Lane on Wednesday evening, and Foxes fans will hope Mahrez can continue his scintillating season and lead his side to three vital points at the top of the Premier League.