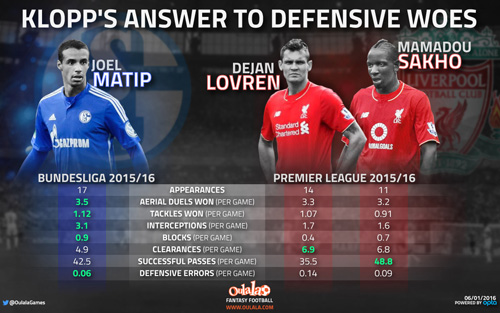 As Dejan Lovren and Mamadou Sakho continue to struggle, Liverpool’s interest in Joel Matip could be the answer to their defensive frailties.

Fantasy football game www.oulala.com’s have compared Matip’s stats this season to both Lovren and Sakho.

With Martin Skrtel out injured for the foreseeable future and Liverpool having conceded nine goals in their last six Premier League matches, many agree that the Reds need to invest in a solid centre-half.

Matip’s current contract with FC Schalke 04 runs out at the end of the season and he has reportedly turned down a new deal with the club.

In the wake of Liverpool’s most recent Premier League loss away to West Ham, Alan Shearer has been vocal about the pairing’s performances.

In his column on The Sun, the former Newcastle United man stated that many of the players Jurgen Klopp inherited are simply “not good enough”.

Shearer continued: “Dejan Lovren and Mamadou Sakho are not a centre-back pairing that would have scared me as a striker.”

Matip could offer the solidity and consistency at the back that the Reds have so far missed. The German-born Cameroonian international beats both Lovren and Sakho in five out of Oulala’s seven stats on show.

Vitally, Oulala’s stats show that Matip has an impressive amount of aerial duels won with an average of 3.1 per game or 60 in total.

Lovren and Sakho have won 46 and 35 aerial duels respectively.

Should Liverpool manage to bag the 24-year-old, it could solve their aerial struggles.

Both of West Ham’s goal against Liverpool came from crosses.

Klopp has recently bemoaned Liverpool’s inability to deal with aerial balls stating: “Now you can say we have an issue with crosses. Before, we had an issue with set -plays. It is always a ball in the air.”