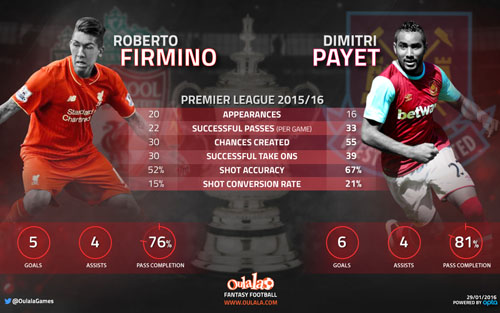 West Ham United will be looking to complete a hat-trick of wins over Liverpool in the FA Cup fourth-round on Saturday, having completed the double over the Reds in the Premier League this season.

Attention will be drawn to two players as the recently impressive Roberto Firmino goes head-to-head with the excellent Dimitri Payet.

Fantasy football game www.oulala.com have crunched the numbers to see how the pair compare since their respective moves to the Premier League.

After joining Liverpool for £29m from Bundesliga side Hoffenheim last summer, Firmino appeared to struggle to adapt to English football during the opening weeks.

The Brazilian failed to complete a full 90 minutes in the Premier League until the Reds 18th game. However, since being pushed further forward by manager Jurgen Klopp, the 24-year-old has excelled.

In his 20 league appearances, Firmino has completed an average of 22 successful passes per game at an accuracy of 76 per cent. He has created 30 chances, registered four assists and has completed 30 successful dribbles.

Having played the full 90 minutes in five of Liverpool’s last six league games, Firmino has netted four of his five goals in the same spell, highlighting the improvement the Brazilian has experienced in recent weeks. Firmino’s shot accuracy sits at 52 per cent, while his shot conversion rate stands at 15 per cent.

In contrast, Dimitri Payet has shown far more consistency for West Ham since joining from Ligue 1 side Marseille for £10.7m last year. Despite suffering an ankle injury 12 games into his Premier League debut campaign, missing the following seven matches, the Frenchman returned to help the Hammers beat both Liverpool and Bournemouth.

Strikingly, West Ham’s win-rate without Payet in the side sits at 14 per cent. In the 16 games that he has appeared, this figure rises dramatically to 50 per cent, highlighting the importance Payet has played for his side.

Despite playing four fewer league games than Firmino, Payet leads the Brazilian for seven of the eight key areas analysed. The 28-year-old is completing an average of 33 successful passes per game at an accuracy of 81 per cent. He has created 55 chances, registered six assists and has successfully completed 39 dribbles.

Payet has scored six goals, recorded a shot accuracy of 67 per cent and has enjoyed a shot conversion rate of 21 per cent.

While Payet has significantly outperformed Firmino in the last six months, the Brazilian’s recent form will give Liverpool fans hope that their side can progress to the 16 of the FA Cup.

Liverpool told they can sign Alex Teixeira for £53m – report