Stats underline memorable 2015 for Leicester City ahead of Tottenham clash 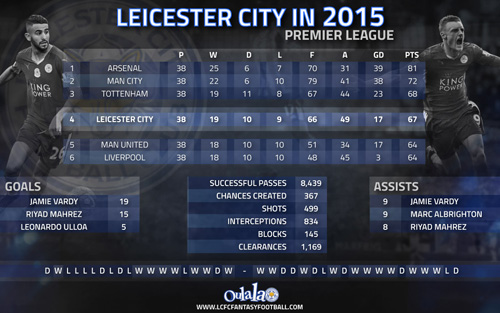 From relegation candidates to Premier League challengers. The numbers behind Leicester City’s remarkable year in 2015.

On 25 December 2014, Leicester City were sat firmly at the foot of the Premier League table and staring relegation in the face. Nigel Pearson’s troops gathered together in the second half of the 2014/15 campaign, going on the pull off what is now known as ‘The Great Escape’, finally finishing 14th in the league.

During the summer, Italian Claudio Ranieri took up the managerial reins, with many questioning the appointment. The doubters were silenced early on as Leicester flew out of the blocks, picking up 11 wins from their opening 17 games and losing just one.

Fantasy football game www.oulala.com’s have taken an in-depth look at Leicester City during 2015 and have highlighted an array of unbelievable stats that made the Foxes the most talked about side in the Premier League last year.

As a team, the numbers behind Leicester’s dramatic year were impressive. The Foxes completed 8,439 successful passes, created 367 chances and had 499 shots.

Leicester were excellent going forward, however were just as busy defensively in 2015. They made 834 interceptions, 145 blocks and 1,169 clearances.

Throughout the year the Foxes picked up 19 wins, 10 draws and nine defeats from 38 games to collect a total of 67 points, putting them fourth in the Premier League table during the calendar year.

Are Leicester City good enough to maintain this tremendous run? While many suggest the Foxes will fall away, their stats and form over 38 games clearly suggest that they’re more than good enough to challenge for Champions League football – at the very minimum.

Danny Mills: Why Tottenham won’t sign a striker in January