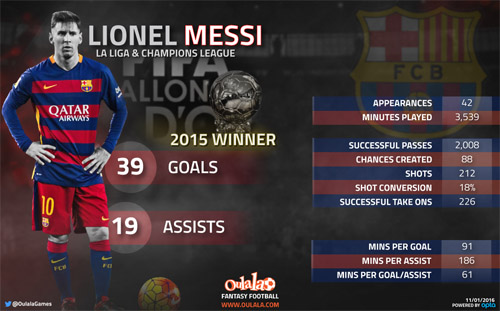 A look at Lionel Messi's stats in 2015 Photo: www.oulala.com

Lionel Messi has beaten Neymar and Cristiano Ronaldo to claim the Ballon d’Or for a record fifth time.

The 28-year-old was voted the best player in the world ahead of his Barcelona teammate and the Real Madrid forward at the FIFA ceremony held in Zurich, Switzerland.

Messi received the most votes from a panel made up of national team coaches and captains, as well as a selection of the world’s media.

The Barcelona forward, who picked up his first world player of the year award in 2009, repeating the feat for the following three successive years in 2010, 2011 and 2012, was hotly tipped to take the title for a fifth time, having finished second to Cristiano Ronaldo in both 2013 and 2014.

Fantasy football game www.oulala.com’s have compiled Messi’s stats in both La Liga and the Champions League during the calendar year, highlighting just how instrumental the Argentine was for Barcelona during their treble winning campaign.

Combining goals and assists in both competitions, Oulala’s numbers show that Messi either scored or made a goal, on average, every 61 minutes. In contrast, Ronaldo took an average of 64 minutes, while Neymar averaged 83 minutes.

The five-time Ballon d’Or winner also registered 19 assists over both competitions in 2015. Two more than Ronaldo (17) and five more than Neymar (14). He recorded a total of 2,008 successful passes in both La Liga and the Champions League during the calendar year, more than both Neymar (1,919) and Ronaldo (1,262).

Messi also outperformed both players for dribbles. The Argentine completed 226 successful take-ons in both competitions during 2015, compared to Neymar’s 196 and Ronaldo’s 66.

Lionel Messi got Oulala’s vote. In 2015 he was Oulala’s overall top points scorer by a long way. The Barcelona forward picked up a total of 1,878 fantasy football points compared to Neymar’s 1,526 and Ronaldo’s 1,235.

Do you agree that Messi deserved to win the 2015 Ballon d’Or?