Arsenal striker Theo Walcott proves what a nice guy he is

Theo Walcott made Saturday a very special day for one Arsenal supporter.

The England international went over to some of the home fans following Arsenal’s 3-1 victory over Sunderland in the third round of the FA Cup.

Walcott didn’t get on the score sheet in the cup win but the 26-year-old was in a pretty good mood in the minutes after the game.

The Arsenal striker called over one home fan and invited the lucky Gooner to take part in famous celebration routine with Per Mertesacker.

To cap a perfect afternoon for the defending FA Cup holders, Walcott gifted the Arsenal supporters his match-worn shirt.

Walcott posted the above video and wrote on his Instagram page: “Happy with 3-1 win & thanks for the help with celebration 😉 #COYG” 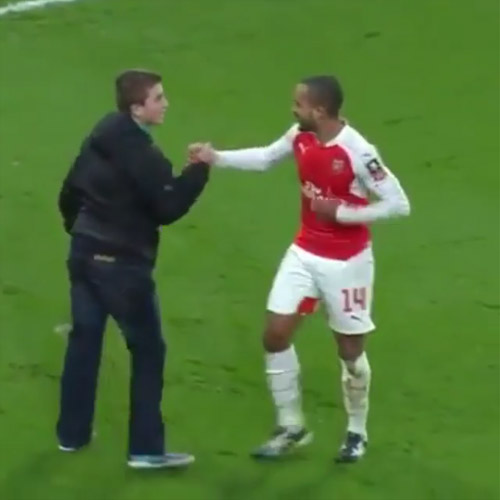 Joel Campbell cancelled out Jermain Lens’s first-half opener for the Black Cats, before Aaron Ramsey and Olivier Giroud sealed a FA Cup victory for the holders.

The Gunners make the trip to Liverpool in their next Premier League game on Wednesday night.

Liverpool set to bid for £22.5m for Anderlecht star – report

Photo: Steven Gerrard reveals one of his favourite Liverpool team-mates