Photo: Alexis Sanchez relaxes by the pool ahead of Arsenal v Leicester 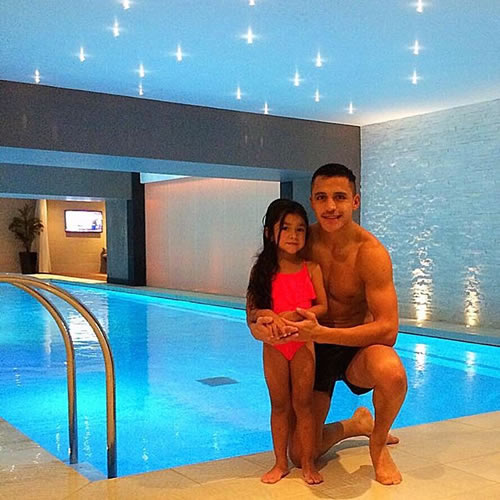 Alexis Sanchez was all smiles as he relaxed at his home swimming pool as he and his Arsenal team-mates prepare for their crunch Premier League clash with Leicester City on Sunday.

The Gunners head into the game looking to secure a victory to underline their status as genuine Premier League title contenders this season.

Sanchez helped Arsenal return to winning ways with a 2-0 victory at Bournemouth last weekend to leave them third in the table and five points behind the high-flying Foxes heading into Sunday’s showdown.

Arsenal know that a win over Claudio Ranieri’s men would leave them just two points behind the Premier League leaders heading into the final 12 games of the season.

Sanchez has recently made his return from a hamstring injury and will be hoping to start Sunday’s game at The Emirates.

And the 27-year-old looked in good spirits as he relaxed at home on Thursday night in the build-up to Sunday’s crunch clash.

Jermaine Jenas: Why Tottenham can hold their nerve in title race