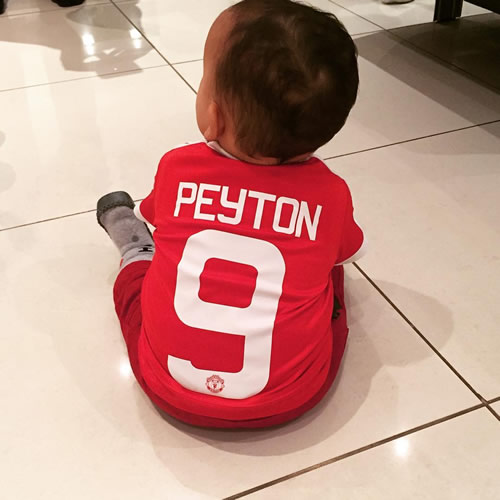 Anthony Martial’s baby daughter is already a keen Manchester United fan, if this photo is anything to go by.

Martial’s wife Samantha posted the picture above of the couple’s young child Peyton on her personal Instagram account on Tuesday night before the Red Devils’ Premier League clash with Stoke City at Old Trafford.

Peyton already has her own personalised shirt as she prepared to cheer Martial on with her mother ahead of the top-flight game.

French striker Martial’s rise to prominence has been one of the few positives from an otherwise disappointing season thus far for Manchester United.

The 20-year-old has been a regular fixture in the Red Devils’ first team after arriving at Old Trafford from Monaco during the summer transfer window.

Manchester United are set top turn their attentions to their crunch Premier League clash with Chelsea at Stamford Bridge on Sunday afternoon.

United finished fourth last season under Louis van Gaal but were dumped out of the Champions League at the group stage in December.