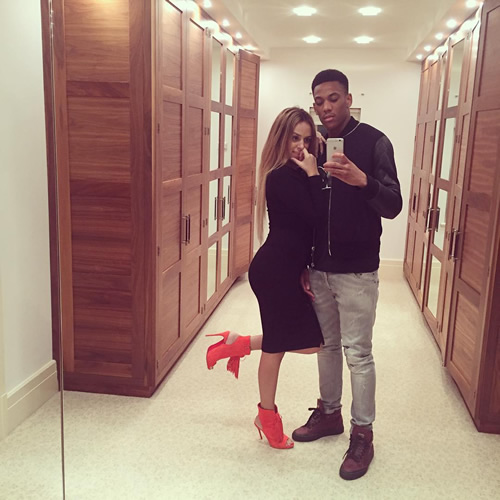 Anthony Martial enjoyed a meal out with his wife Samantha on Wednesday night as he and his Manchester United team-mates ramp up their preparations for Sunday’s showdown with Chelsea at Stamford Bridge.

The 20-year-old forward was in fine form on Tuesday night as he scored one and set up another to help Louis van Gaal’s side record a comfortable 3-0 win over Stoke City at Old Trafford in the Premier League.

United have been struggling to find consistent form in recent weeks but Martial’s emergence since his arrival at the club from Monaco in the summer has been one of the few positives from an otherwise disappointing campaign for Red Devils fans.

And the French forward treated his partner to a meal out at Wing’s restaurant in Manchester on Wednesday night ahead of Sunday’s trip to west London.

Samantha Martial shared the picture above of the couple on her personal Instagram account and wrote: “Wings restaurant.”

United are fifth in the Premier League heading into Sunday’s game in the capital.