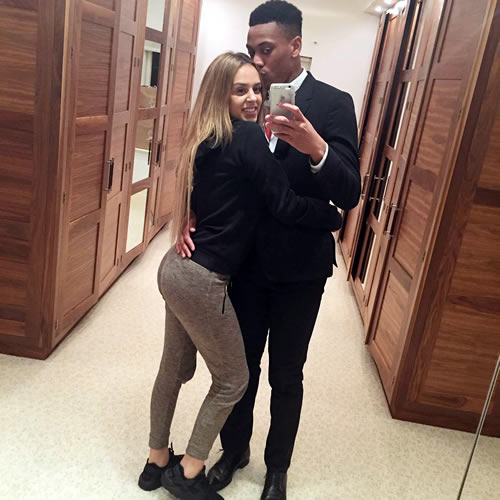 Anthony Martial snapped a selfie with his wife Samantha after helping Manchester United return to winning ways in the Premier League with a convincing 3-0 victory over Stoke on Tuesday night.

The French striker has been one of United’s most consistent performers this season and was named man of the match as he scored one and set up another against the Potters at Old Trafford.

Jesse Lingard headed in Cameron Borthwick-Jackson’s cross to give United the lead in the 14th minute, before summer signing Martial made it 2-0 shortly after.

Wayne Rooney then added a third when he scored from close range eight minutes after half-time.

It was a welcome victory for Louis van Gaal’s men, who had only won two of their last 10 Premier League games before Tuesday’s win.

And Martial was quick to return home to his wife after helping United stay within five points of the top four in the table.

Samantha Martial posted the picture above on her personal Instagram account and wrote: “Love and best friend for ever.”

Manchester United’s next game is a trip to defending champions Chelsea on Sunday afternoon.

Photo: Lamela, Eriksen and Tottenham stars all smiles on flight back to London