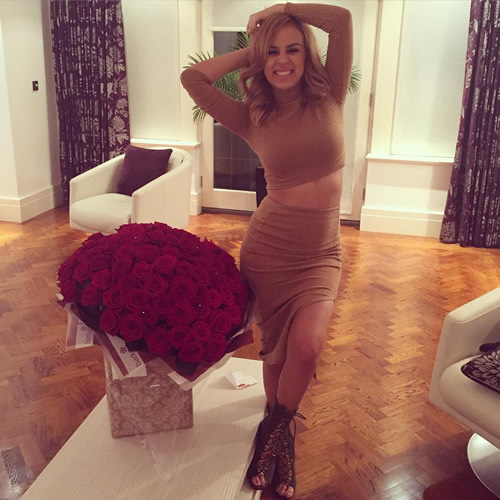 Samantha Martial was all smiles as she posed for a picture with a huge bouquet of roses given to her on Valentine’s Day by her husband.

Anthony Martial played the full 90 minutes as Manchester United slumped to a disappointing 2-1 defeat by Sunderland at the Stadium of Light on Saturday afternoon as the Red Devils suffered another setback in their hopes of securing a top-four finish this season.

However, the Manchester United forward was in no mood to let the loss to the Black Cats get him down as he spent Valentine’s evening with his wife at home.

Samantha shared the picture above of herself next to her gift on her personal Instagram account and wrote: “@martial_9 ❤️ je t’aime”

Martial, 20, has been a regular fixture in the Manchester United first team since arriving at the club from Monaco in a big-money deal back in September.

United travel to Midtjylland in the Europa League last 32 on Thursday night.

Martial will be hoping to feature when United return to action with an FA Cup trip to Shrewsbury on Monday 22 February, before their crunch Premier League clash with Arsenal at Old Trafford on 28 February.