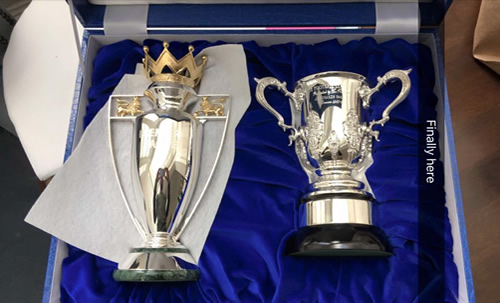 Cesc Fabregas received a reminder of Chelsea’s recent success on Friday to take help him take his mind of the Blues’ stuttering campaign this term.

The Spanish midfielder helped the west London side win the Premier League and League Cup last season in what was his first campaign since joining the club from Barcelona in the summer of 2014.

The success of the 2014-15 campaign under Jose Mourinho seems a distant memory after the Blues’ poor form this term.

The Portuguese coach was sacked by the west London club back in December with Chelsea languishing closer to the relegation zone than the top of the table.

However, Fabregas was buoyed by a delivery of replica trophies to mark his Premier League and League Cup success with the Blues on Friday afternoon, as he shared the picture above on his Snapchat account.

Fabregas will be hoping to feature when Chelsea take on Manchester City in the fifth round of the FA Cup on Sunday afternoon.

Photo: Cesc Fabregas all smiles with his girlfriend ahead of Chelsea v Man City