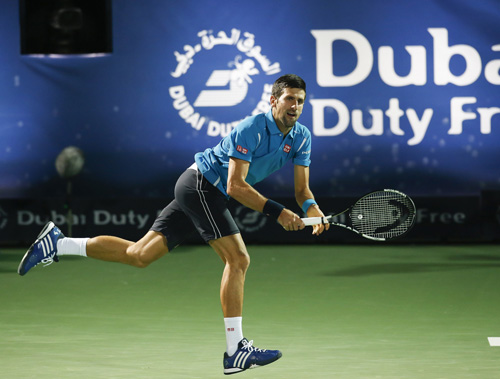 The remarkable 28-year-old Novak Djokovic is continuing to stride through tennis’s history books at this week’s Dubai Duty Free Tennis Championships with an ease that must sow dread in the hearts of whoever he faces across a net.

He is already a four-time champion in the Emirates, and was the runner-up here last year. Back then, Roger Federer won his seventh Dubai title, but this time not even that formidable opponent can threaten the Serb: the Swiss is absent following knee surgery.

Federer was, last year, one of the few men to persistently challenge Djokovic’s dominant season. The Swiss won three matches of the six that Djokovic lost and lost to him in five other finals, including two Grand Slams and the World Tour Finals.

But Djokovic was virtually impregnable, winning 82 matches for those six losses—and aside from one round-robin loss at the World Tour finals, he has been unbeaten since his US Open campaign.

Already he has two titles this year—a career 60th in Doha and a record-tying sixth Australian Open—to take his tally to 13 titles from 17 consecutive finals.

Now, should he reach another final in Dubai, he will overtake Federer’s run of 17 finals during 2005 to 2006 and equal Lendl’s record of 18 straight from 1981 to 1982. And bearing in mind that Djokovic has only ever lost once before the semi-finals in Dubai, and that was in reaching the quarters on his tournament debut in 2007, the odds of his reaching another final look better than good.

However, that was not the only milestone on the cards in Dubai, for he arrived for his 10th Dubai event on 698 match-wins.

With a win over Tommy Robredo already under his belt, victory over Tunisian wild card Malek Jaziri would make it 700, and membership of a club that only a handful of great players have achieved.

Among active players, only Federer (1,067) and Rafael Nadal (775) have done so, and a glance down the list of the other Open Era ‘700 Club’ shows just what elite company Djokovic was about to join.

And yes, Djokovic made light work of 32-year-old Jaziri in just 66 minutes, 6-1, 6-2, though the perfectionist Serb was not entirely happy with his performance:

“First set and a half I was, and then I started missing a lot of easy forehands from midcourt. It frustrated me, honestly, a little bit. I think that was a pretty poor conversion of the break points, four out of 16—or something like that. But, you know, I managed to win the match—same scoreline as yesterday. I will take the positives out of tonight’s match and hopefully be able to raise my game even more.”

He next plays veteran Spaniard Feliciano Lopez, a two-time finalist at the tournament, but a man Djokovic has beaten in all seven previous matches—though he did drop a set to Lopez in their only Dubai meeting.

“I know he likes playing here and likes the conditions. He slices, and the ball travels through the air quickly and you’ve got to be very reactive, very quick with the baseline shots, especially when you play somebody like Feliciano, who comes in very often.

“I’m going to try to prepare for this match well and raise the game a little bit more than tonight.”

But a look back at those statistics, milestones and achievements—and at the relatively young age of 28—suggest that Lopez will not be immune from at least a touch of dread in his heart.