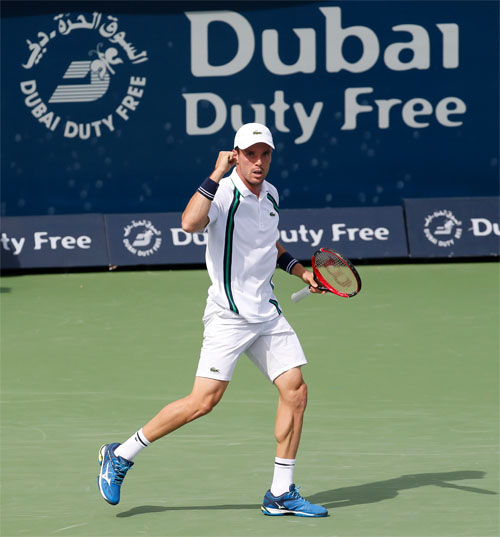 The old guard at the Dubai Duty Free Tennis Championships has again been proving its mettle as the original 32-man draw battled its way to the quarter-final stages of the prestigious 500 tournament.

A full 15 of the starting line-up was aged over 30, and by the end of Wednesday’s day session, four were already through to the quarters with one more, No2 Stan Wawrinka, a hot favourite to make it five by the time he had completed the schedule against No188 qualifier, Franko Skugor.

At one end of the draw, the oldest in the draw, 34-year-old Feliciano Lopez, a two-time finalist in Dubai, took barely and hour and half to beat Lukas Rosol, 6-3, 7-6(7). His reward, though, is likely to be a quarter-final against four-time champion and top seed, the irrepressible Novak Djokovic.

At the other end of the draw, 32-year-old Philipp Kohlshcreiber took out the teenage star who reached the semis here last year, Borna Coric, also in an hour half and a half, also in straight sets, 6-2, 7-6(5). But his reward is little better than that of Lopez: the German is likely to face Wawrinka for the first time in almost eight years.

In between, another two-time finalist, the always impressive, always consistent Tomas Berdych, seeded No3, gave qualifier Thomas Fabbiano little room for manoeuvre. It took him just 74 minutes to reach the quarters, 6-2, 6-3, and extended his record in Dubai to 22-9 in his 10th appearance here.

That set up what promises to be one of the matches of the tournament against the exciting 20-year-old, Nick Kyrgios, who continued his speedy progress and hot form with a 63-minute victory over Mikhail Kukushkin, 6-3 6-2.

The young Australian arrived at his first Dubai holding his first ever title, won just days before in Marseille, where he beat Richard Gasquet, Marin Cilic—and Berdych, all without dropping serve. His only other match against Berdych was just a month before, at the Australian Open, a tough four-setter that went to the Czech. So with both men thriving on Dubai’s fast courts, their quarter-final tussle should be a thriller.

Another cracker could materialise in a first meeting between 30-year-old Marcos Baghdatis and one of the form men of the moment, No4 seed Roberto Bautista Agut.

Baghdatis is unseeded here but is a former top-10 player of great flair and has been showing signs of a return to the form and fitness that saw him surge to the Australian Open final a decade ago. He beat No5 seed Viktor Troicki in the first round in Dubai, and has now taken down Vasek Pospisil in a scant 66 minutes, 6-4, 6-2.

But the 27-year-old Bautista Agut is proving to be a resilient opponent this season. He is already one of the few men to have two titles, in Auckland and Sofia, and reached the quarters in Chennai and Rotterdam, too. And against teenager Hyeon Chung, who last year received the ATP Most Improved Player Award, he was ruthless in racing to a 6-0, 6-1 victory in just 54 minutes—his 16th win of the year so far.

The Spaniard was clearly delighted with his continuing form:
“It’s good to win like this, playing well and doing everything you practise for and get the result.

Ditto every other man in the field, but especially for those veterans Lopez and Kohlschreiber.