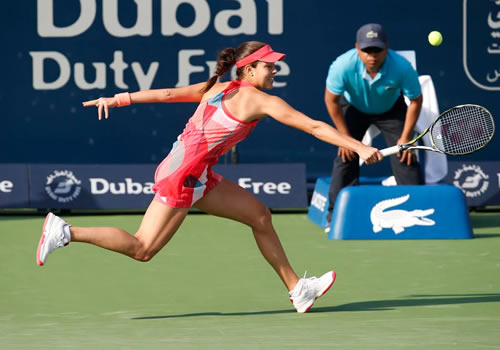 The line-up of players for the valuable WTA Premier, the Dubai Duty Free Championships, worth almost $1.75m in prize money, may have been hit by late injury withdrawals from three of the top four women in tennis—Serena Williams, Angelique Kerber and Agnieszka Radwanska—but that does not mean it is wanting in star power.

As play got under way in the Emirates this week, it still boasted four top-10 players plus a handful more of Grand Slam champions and finalists, the likes of Sara Errani, Svetlana Kuznetsova, and Roberta Vinci. But by the end of Round 1, seeds four to eight had all lost, with Vinci and Kuznetsova joined by the newest member of the top 10, Swiss teenager Belinda Bencic and No6 seed Karolina Pliskova.

However, two of the most popular women on the circuit, Ana Ivanovic and Jelena Jankovic, ranked 17 and 20 respectively, who both reached No1 in the rankings back in 2008, turned on the form to set up two high-octane second-round contests.

Ivanovic took just 53 minutes to beat the fast-rising Daria Gavrilova, 6-1, 6-0, and that set a clash with the top seed and defending champion, Simona Halep.

Ivanovic had met Gavrilova just once before, in Rome last year, and lost out in a marathon contest, 5-7, 7-6 (2), 7-6 (7) to the 21-year-old. This time, she credited her aggressive tactics for the reversal of fortune: “I expected a very tough match because of the battle we had in Rome on clay. I really tried to step it up today and be aggressive. Especially here in the desert, I feel that the ball sometimes flies a little bit quicker through the air, so I tried to use that to my advantage.

“I know I have done the work, and now it’s just about executing and also enjoying competition. The next match is going to be a tough one. Simona is a very tough, consistent player. She strikes the ball well, she moves well, so it’s going to be a good challenge.”

Jankovic endured a considerably longer and more intense fight against Bencic, whose exertions in reaching the final in St Petersburg at the weekend began to weigh heavy in her legs.

Jankovic admitted it had been tough: “It was a really difficult match. Belinda is playing very well, and she’s in form and she’s coming from a final in St Petersburg. Of course she was coming with confidence here. I just fought hard. I was hanging in there every point. There was some good tennis but there were also tough times for me during the match. But the most important thing is that I won at the end.”

She added, referring to the fact that she turns 31 at the end of this month: “When you look at it, I’m like 12 years older than her, almost her whole age! That was my advantage tonight.”

Vinci, who beat Bencic to the title in St Petersburg, also paid the price of a punishing schedule as she fell, 6-0, 4-6, 6-3, to qualifier Yaroslava Shvedova.

World No21, Elina Svitolina, who has just joined forced with former world No1 and four-time Dubai champion, Justine Henin, beat qualifier Jana Cepelova, 6-3, 6-1, to set up a meeting with No2 seed Garbine Muguruza.