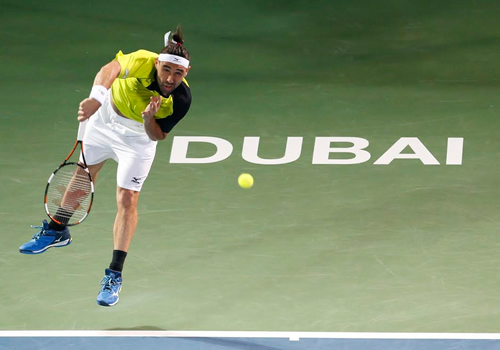 No2 seed Stan Wawrinka will take on fellow 30-year-old Marcos Baghdatis in pursuit of the Dubai Duty Free Tennis Championships on Saturday.

While the reigning French Open champion Wawrinka is perhaps not a surprising finalist, the unseeded Baghdatis, who has reached only his second final since 2011 and has not won a title in six years, is a more unexpected, though very popular addition.

Currently ranked 57, Baghdatis is though a former top-10 player of great flair, and has been showing signs of a return to the form and fitness that saw him surge to the Australian Open final a decade ago. He beat No5 seed Viktor Troicki in the first round in Dubai, and then Vasek Pospisil in a scant 66 minutes. He sailed through one of the form men of the season, Roberto Bautista Agut, 7-5, 6-0, in the quarters, but against the 34-year-old Feliciano Lopez, he very nearly came unstuck.

The attacking game of the elegant single-handed Spaniard had been thriving, in single and doubles, on the fast, slick courts of Dubai, where he has twice before been a finalist, and he played a wonderful blend of serve and volley, chip and charge, slice and dice, to unsettle Baghdatis in a fast opening set, 6-3.

The Cypriot then found better rhythm, and managed to counter the aggressive Lopez game to break early in the second set, 3-0. But the Lopez serve returned with a vengeance—he got on the scoreboard with a remarkable 28-second service game—and broke to level 3-3. Through a sequence of long, patient rallies, he broke once more, but Baghdatis levelled again, survived another break point in the ninth, and they edged to a tie-break.

Now Lopez tensed up while Baghdatis focused all his new-round self-belief and ability to take a 6-0 lead, and served out the set, 7-6(1).

Lopez began to look mentally drained and the errors flowed as he missed half his first serves. He held the opening game of the third, but would not get another, and cut a weary figure as he offered up a final break to love, 6-1. But until the closing stages, the match had been a master-class in variety, tactical smartness, attack and defence, and the Centre Court crowd cheered like they had not done all week.

Remarkably, Lopez went on to play and win his doubles semi-final with fellow Lopez, Marc, and will play the final against Italian duo Andreas Seppi and Simone Bolelli tomorrow before Baghdatis and Wawrinka take to court.

Baghdatis this year has talked of the inspiration and support he has drawn from marriage to former WTA player Karolina Sprem and from fatherhood: Sprem recently gave birth to their second child. On reaching his biggest final in six years, he explained: “It’s been a long road for me the past three, four years. It’s all about fighting, getting back to where I want to be. Now I’m moving forward. I think I have still a lot to improve on, but the most important thing is health-wise I’m very, very good. I don’t have any injuries or the health problems that I had. I’m happy I’m back on the court and winning. It’s a nice feeling.

“I have definitely thought of retiring. That’s where my wife was there and was very strong, made me take the right decisions. My agent, my parents, my team around me, we saw the light at the end of the tunnel.”

He has more ambitions, too, as he told ATPWorldTour.com: “Last year so many 30 and over guys won the tournaments. It’s encouraging to see. They’re playing their best tennis and I think I am playing my best tennis. I think I can play even better and be more consistent. That’s what we’re working for.”

Both Wawrinka and Baghdatis are playing in their first Dubai final, and Wawrinka has won all five of their previous meetings.