Sara Errani is through to the semi-finals of the Dubai Duty Free Championships, while Ana Ivanovic crashes out 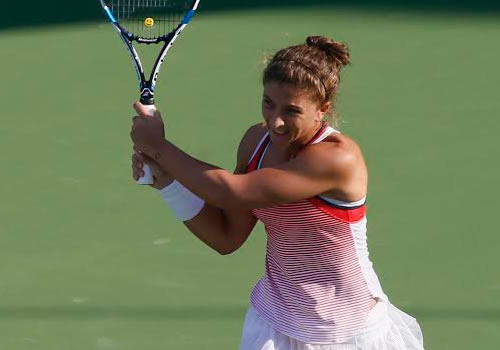 It has, it seems fair to say, been an extraordinary Dubai Duty Free Tennis Championships so far this year.

Before it even began, three of the top four in the women’s world rankings withdrew with injury: Serena Williams, Angelique Kerber and Agnieszka Radwanska.

Among the eight seeds, though, was defending champion Simona Halep plus the newest woman to break into the top 10, teenage star Belinda Bencic.

The No7 seed Roberta Vinci, on her 33rd birthday, discovered she was about to make ranking history: She will become the oldest ever woman to break into the top 10 after winning her biggest ever title last week in St Petersburg.

Yet a less auspicious record was set by the end of Round 2, as the tournament stretched into the early hours of Thursday morning courtesy of inauspicious weather A rain and hail storm in the Emirates held up proceedings for over three hours, and by the time the last two matches had been played, not a single seed had won a match—the first tournament on the WTA and ATP tours to suffer such a reversal of form.

And the four matches that determined the semi-finals kept the surprises coming.

The next highest ranked woman and former world No1, Ana Ivanovic, No17 and showing fine form to beat Halep in straight sets, fell to No47 Barbora Strycova, 7-6(5), 6-3.

On paper their head-to-head record was one-sided: Ivanovic had won all three of their previous encounters with relative ease, but this time, the Czech took an early 4-2 lead, and although Ivanovic hit back with three games in a row, it went to a tie-break. Again Ivanovic led 5-3 but double faulted, and Strycova surged to the set.

Ivanovic hit back with an immediate break to open the second set, but Strycova broke straight back and went on to serve out the match, 6-3.

Strycova next plays the No38-ranked Caroline Garcia, who reached the first Premier-level semi-final of her career when she defeated Andrea Petkovic, 6-3, 6-4.

Garcia did not face a break point in the first set, instead breaking to lead 2-1 in a lengthy third game and then again for the set. She then made a great start to the second set, breaking to lead 2-0. And although Petkovic immediately broke back in the next game, a further break in the final game secured victory.

The fast-rising Elina Svitolina, both ranked and aged 21, backed up yesterday’s win over No2 Garbiñe Muguruza by beating Coco Vandeweghe, 6-4, 1-6, 6-2, in just under two hours.

She afterwards described the seesawing scoreline: “Good start, then I was struggling a bit. I think it was just something in my head. I was just somewhere not on the court. Was really happy that I could find a way to start third set well. OK, 2-0 down, but still I felt that I’m getting there.”

Errani led 4-1 in the first set but lost the next five games and the set. She levelled the match at one set apiece after winning the first five games of the second set, and then had to fight back from 1-4 down in the third with another five-game run.

Errani admitted: “Yes, really strange match. I mean, she had a game that she did not miss a ball sometimes. She’s more aggressive. Sometimes she just waits more. So it’s not easy to play against her. I could easily have lost, so I don’t know why I won the match! There is no explanation to this. Just keep fighting.”

Errani and Svitolina play their semi-final at 2pm local time (10am UK), and Errani then plays doubles. Garcia plays Strycova at 7pm local time (3pm UK), and Garcia also follows her match with a doubles semi-final.