Photo: Erik Lamela all smiles with Tottenham stars ahead of Man City clash 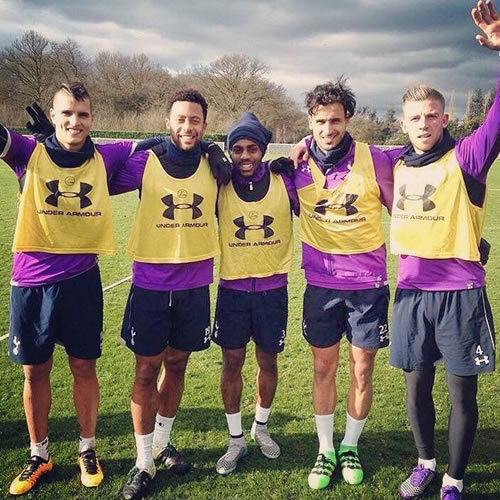 Tottenham were in training on Wednesday Photo: Erik Lamela / Instagram

Erik Lamela and his Tottenham Hotspur team-mates look to be in good spirits as they continue their preparations for their Premier League showdown with Manchester City this weekend.

Spurs have been in fine form in recent weeks and moved up to second place in the Premier League table thanks to their 1-0 win over Watford at White Hart Lane last Saturday.

With Arsenal hosting Leicester at The Emirates on Saturday, Spurs could have the chance to close the gap to the Premier League leaders when they take on City at The Etihad.

And Mauricio Pochettino’s men certainly look to be in a positive frame of mind heading into the game, if Lamela’s post on Instagram is anything to go by.

Lamela shared the picture above on Wednesday afternoon and wrote: “My team in training today #COYS”

Lamela has been a regular fixture in the Tottenham first-team this season and has scored three goals and made three assists in 22 Premier League games this term.

Martin Keown: This is what Arsenal must to do win the league