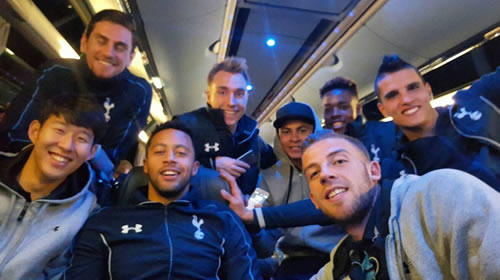 Tottenham’s star players all looked to be in good spirits as they posed for a picture on the team bus after Sunday’s impressive 2-1 win over Manchester City.

Spurs were in fine form against the Citizens as they battled to their fifth straight Premier League win to boost their title hopes.

Harry Kane gave his side the lead from the penalty spot in the 53rd minute after Raheem Sterling was controversially penalised for handball by referee Mark Clattenburg.

Kelechi Iheanacho levelled for the home side in the 74th minute, but the Lilywhites took the three points after Christian Eriksen slotted in seven minutes from full time after being found by Erik Lamela.

The win left Spurs second in the table and level on points with Arsenal after the Gunners’ 2-1 win over Leicester earlier on Sunday.