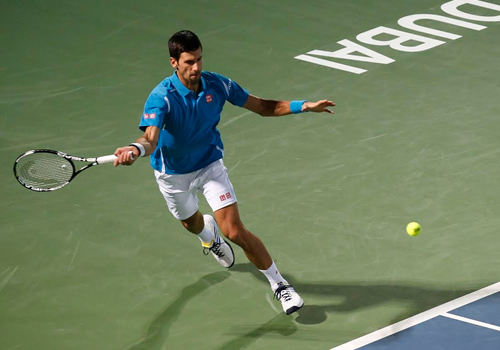 It is one of tour’s most prestigious and glamorous tournaments, the ATP500 that sits between turquoise Arabian Gulf and the golden desert of the United Arab Emirates.

It is the Dubai Duty Free Championships, which boasts a $2.25m purse and over half a million US dollars to its singles champion.

No wonder it draws the cream of men’s tennis, and has an honours board worthy of a Masters or a Major. Eleven of its last 13 champions—and every one since Andy Roddick won in 2008—have been named Roger Federer or Novak Djokovic. Last year they contested the final between them, as they did in 2011, and Federer holds the tournament record with seven titles.

The mighty Swiss is missing this year while he recuperates from knee surgery, but the super Serb returns as top seed, and his performance since this time last year makes him hot favourite to claim his fifth Dubai trophy.

Djokovic is playing in his first tournament since winning a record-tying sixth Australian Open title last month, which marked his 17th consecutive final going back to last year’s Australian Open. During that streak, he has won 13 of 17 finals, including the last seven dating back to the US Open in September.

Djokovic is on track to join another exclusive club of players who have won 700 tour matches: He opens his 10th Dubai campaign on 698. Among active players, only Federer (1,067) and Rafael Nadal (775) have passed that milestone.

But the quality of the draw this year, even with Federer, Andy Murray (on paternity leave) and Nadal (playing the South American ‘golden swing’) missing, is formidable. 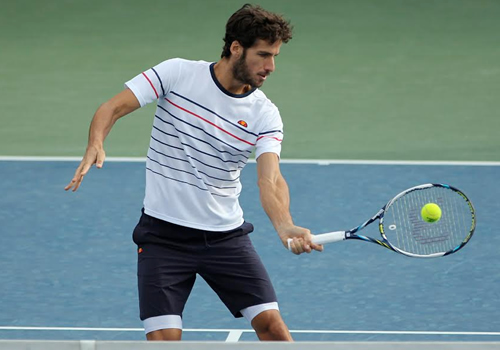 Feliciano Lopez is the oldest man in the draw at 34Photo: Marianne Bevis

Four fellow seeds have already won titles this season: No2 Stan Wawrinka in Chennai, No4 Roberto Bautista Agut in Auckland and Sofia, No5 Viktor Troicki in Sydney, and No7 Martin Klizan the 500 in Rotterdam.

And then there is the youngest 2016 champion so far, Nick Kyrgios, who claimed his first crown days ago in Marseille, aged just 20. Along the way, he beat two top-10 players, Richard Gasquet and Tomas Berdych, plus a Grand Slam champion in Marin Cilic—and he did not drop serve all tournament. In this his Dubai debut, Kyrgios is drawn against Klizan for what promises to be a high-octane first-round match.

The Australian is not the only youngster hoping to makes waves, though. The 19-year-old Borna Coric, who beat Andy Murray on the way to the semis here last year, has a first meeting with towering 22-year-old Jiri Vesely, while another teenager, Hyeon Chung, put paid to Andreas Seppi on the very first day of play.

But it is arguably among the over-30s where the biggest threat might be found. No3 seed Berdych, in his 10th Dubai draw, reached the final in 2013 and 2014, and made the semis or better in four of the last five years, a 20-9 record.

The big Czech is one of a remarkable 15 over-30s in the 32-man draw, including five of the seeds. And aside from Berdych, 34-year-old No6 seed Feliciano Lopez is also a former finalist on Dubai’s fast courts, in 2004 and 2008.

Lopez, the oldest man in the draw, who reached a career-high No15 less than a year ago, was here going for a big milestone of his own, a 400th match-win, but he faced a tough challenge in fellow over-30 Spanish single-hander, Guillermo Garcia-Lopez, a man ranked 35.

It proved to be a fine and fast-moving match of elegance and power, attack at the net and quick baseline rallies, of old-fashioned chip and charge and probing baseline rallies. It was not just good-looking tennis for the purists—a leftie one-hander against a rightie one-hander—but a constantly-moving contest with little pause between serves on either side.

In truth, after the 37 minutes it took Lopez to break twice and win the first set, 6-1, it had the makings of a one-sided victory, but Garcia-Lopez had other ideas. He broke first in the second set, was broken back, but then took advantage of a double fault on break point from Lopez to take the set 6-4—his first in four visits to Dubai.

Garcia-Lopez was by this stage serving the better, while the usually impressive Lopez struggled to top 50 percent on first deliveries. But that changed in the decider. He broke in the opening game and held to love with an ace. Facing deuce in the fourth, he hit his 12th ace of the match, and began to attack the Garcia-Lopez serve in the next, though he could not convert three more break chances.

Lopez did come under threat in the eighth game, but saved break point and pulled off the shot of the match, a high backhand angled smash winner, and served out his 400th match-win, 6-4.

He later admitted: “I’m very happy, because I think it’s a good number, 400 wins. It’s been long time since I started playing tennis… and it means that I was also very lucky in terms of not having injuries during my career.

“I think Guillermo is a tough player, very solid, very good ground-strokes. He hits the ball really hard. But I was very aggressive. I think I was doing the right things, especially in the beginning of the match.”

Djokovic commented: “Obviously playing my first match in three weeks, different conditions, I didn’t know how I would start… But everything went well… I was putting constant pressure on his serve, I returned very, very well, served solid, and was aggressive from the back of the court. I cannot be happier with this performance.”

It is, it would appear, almost inconceivable that Djokovic will not be celebrating win No700 on his way to Dubai’s quarter-finals come Thursday.