What a gent @juanmata8 is - repeats his gesture from last year by embracing every #CFC player as they exit @br_uk pic.twitter.com/MvifObswsX

Juan Mata has already paid tribute to Chelsea’s fans for the warm reception he was given during Manchester United’s 1-1 draw at Stamford Bridge on Sunday.

Now, the Spanish playmaker has shown just what a classy operator he is as he hung around after the final whistle in west London to show his respect for his former team-mates.

Reporter Garry Hayes captured the above images after the game at Stamford Bridge, with Mata snapped embracing Eden Hazard and Nemanja Matic after the thrilling Premier League game.

Mata spent two and a half years at Chelsea before his transfer to Manchester United in January 2014, and the Spaniard remains a firm favourite at Stamford Bridge despite him now playing for one of their Premier League rivals. 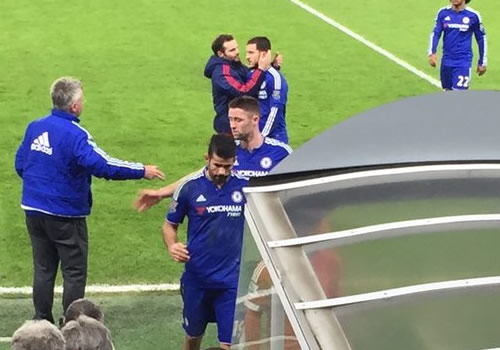 The playmaker was greeted by a chorus of applause from the Stamford Bridge faithful when he was substituted in stoppage time during Sunday’s game.

Jesse Lingard had given United the lead with a spectacular strike but Diego Costa equalised for the hosts deep into stoppage time.