Philipp Kohlschreiber, Marcos Baghdatis and teenager Hyeon Chung were among the winners in Rotterdam on Tuesday 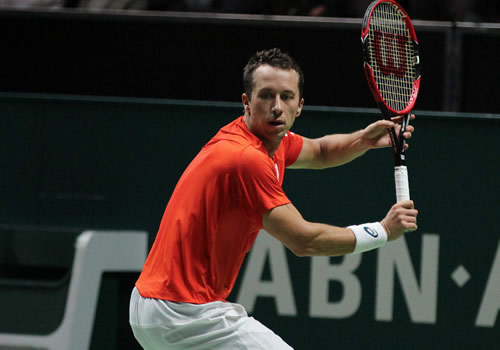 They may have been on the professional tour for upwards of 15 years, but over-30 men such as Andreas Seppi, Guillermo Garcia-Lopez and Gilles Muller do not believe in making life easy for themselves. All three found themselves in long opening three setters—and just one survived.

Ladies’ Day, though, was packed with matches by some of the older men in the Rotterdam draw. Boasting 64 years between them, Julien Benneteau played Philipp Kohlschreiber. Tommy Robredo, 33 years old, would close out the day’s play against Martin Klizan, and Marcos Baghdatis, 30, took on the No4 seed David Goffin in perhaps the highlight of the afternoon.

But first up were right-handed Seppi and left-handed Muller, and the big man from Luxembourg was about to score his first win over the Italian at his fourth attempt, in a close three-setter, 4-6, 7-6(2), 6-4.

It continued a good streak for Muller, who had already reached two semi-finals this year, but now he will face the highest ranked player remaining in the draw, 2014 runner-up Marin Cilic.

If fans thought the 2hrs 6mins Muller-Seppi match was close, however, it had nothing on the 32-year-old Garcia-Lopez’s encounter with teenager Hyeon Chung, winner of the ATP’s Most Improved Player of the Year Award in 2015.

Chung climbed more than 120 places from No173 in the rankings last season after winning four titles on the Challenger Tour, and this was the Korean’s first ever Rotterdam match.

One of the very rare group of players on the tour to play in spectacles, Chung is new to many on the tour, but he was showing why he is such a promising prospect. Indeed he led in both opening sets, but in the first, the elegant one-hander from Spain broke back as Chung served for the set, and the long, fast baseline rallies grew in length and number. A fine passage of play by Garcia-Lopez broke again for the set, 7-5.

Chung lost an early 4-1 advantage in the second set, but finally levelled the match, 6-4. 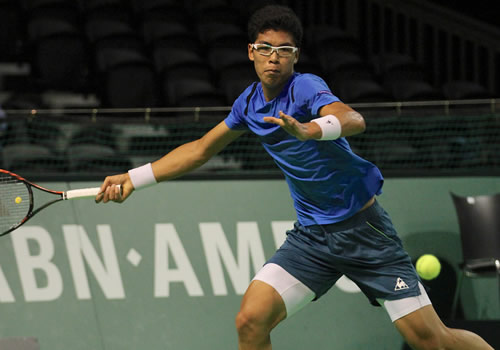 Already with almost two hours on the clock, he and Garcia-Lopez were only just heading into a deciding set. A quarter of an hour later, they were still locked at 1-1 with 94 points apiece. But again, it was the older man who came under pressure first, saving four break points but giving up the lead after almost two and a half hours, 2-3.

Once more the No34-ranked Spaniard broke back, 4-4, but this time, Chung pounced right back, broke, and served out one of his biggest wins, 6-4, after 2hrs 42min.

He will next play the winner between qualifier Andrey Kuznetsov and No8 seed Viktor Troicki.

Kohlschreiber had never dropped a set in the 12 years during which he had played Benneteau—but then, surprisingly, they had only played five times, most recently in 2009. And when it came to Rotterdam, the German may have been wary of his French opponent’s record: Benneteau had reached the quarters or better three times, including reaching the finals in 2013 after a shock upset of defending champion Roger Federer.

He need not have worried. Kohlschreiber broke in the seventh game, held for 5-3, and served out the opener, 6-4. He then broke straight away in second set, and although he gave up a break back, he broke again to ensure set and match, 6-4, in 90 minutes. Kohlschreiber goes onto face qualifier Ivan Dodig, a fellow over-30, in the second round.

Could Baghdatis make it three in a row for the over-30 club? On paper, he had little chance, hugely out-ranked by the nimble No4 seed Goffin. But in fact, Baghdatis had won three of their four matches, two of them last year, and he looked as though he would rout Goffin in the first half hour.

Amid countless mistakes, Goffin did not win a game until the sixth, and soon after was a set down, 6-1.

The Belgian began the second set more strongly, holding to love for 2-1. Indeed both men served well throughout the set, and a tiebreak looked inevitable until Goffin got the break to take the set 7-5.

It was nip and tuck in third until the fifth game, when the Cypriot made the first breakthrough, 3-2. Goffin, though, broke straight back and had to fight for his life in a long ninth game, with Baghdatis blowing break points as the match moved into its third hour. A love hold apiece, and it would be decided by a tie-break.

Now Goffin got the upper hand, leading 5-2 with a couple of fine backhand winners, but a remarkably focused Baghdatis reeled off five straight points, bringing up match point with an ace. They saved the best for last, a gripping 41-stroke rally that finally drew the fatal error from Goffin, and Baghdatis beat his chest to a huge Centre Court ovation. The winning set was his, 7-6(5) after 2hrs 20mins.

He will now face either Robredo or Klizan for a quarter-final place.

Richard Gasquet forced to withdraw from Rotterdam 2016 with injury