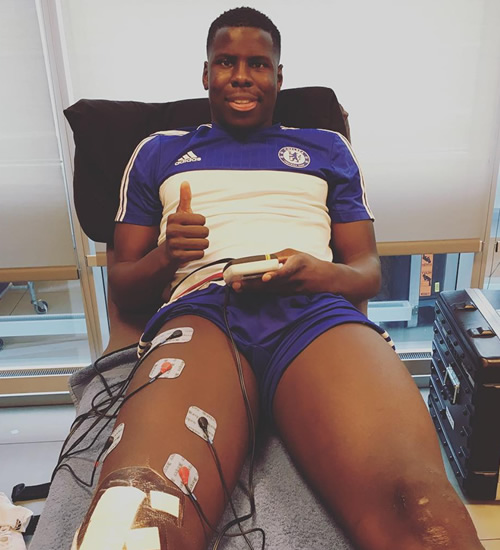 Kurt Zouma was all smiles on Friday afternoon as the Chelsea defender continued his recovery from knee surgery.

The French centre-half has been ruled out for a number of months after suffering the problem during the 1-1 draw with Manchester United in the Premier League at Stamford Bridge on 7 February.

Zouma underwent surgery to correct the problem in Barcelona earlier this month and is now back in London to continue his rehabilitation.

And the 21-year-old certainly looked to be keeping himself in high spirits, as he posed for a picture on the treatment table on Friday.

Zouma shared the picture above on his personal Instagram account and wrote: “Step by step… have a great day all ! #CFCfamily#hamdulilah”

Chelsea, who are 12th in the table, are currently gearing up for their Premier League trip to Southampton on Saturday afternoon.

The Blues warmed up for that game with a thumping 5-1 victory over Manchester City in the fifth round of the FA Cup last weekend.

Louis Saha: Why Man United starlet impressed me so much