Kurt Zouma was snapped walking on crutches after Chelsea’s 1-1 draw with Manchester United at Stamford Bridge on Sunday.

The defender was substituted in the second half of the Premier League draw after landing awkwardly and over-extending his knee.

Zouma appeared to be in serious pain as he was carried off on a stretcher following lengthy treatment on the pitch.

Speaking after Sunday’s game, Blues boss Guus Hiddink said that the Blues were awaiting news about the defender’s injury setback.

But this clip of Zouma walking on the Stamford Bridge pitch on crutches after Sunday’s game can only be seen as a positive for the west London side, although his right leg was in a protective brace. 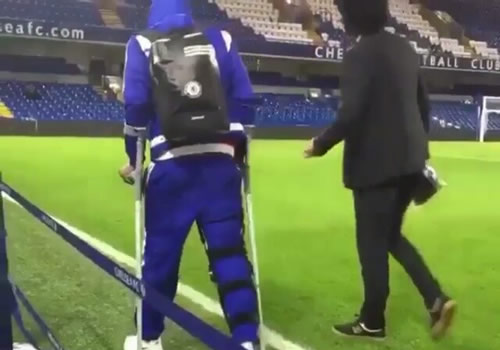 Zouma, who was replaced by Gary Cahill in Sunday’s game, has been a regular fixture in Chelsea’s first-team this season.

The France international has made 23 appearances in the Premier League for the Blues, scoring one goal and notching up one assist so far this term.