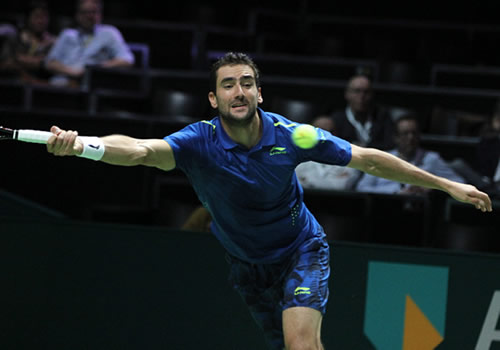 It is eight years since a very young, very tall, very quietly spoken Croatian tennis player first began to make some serious waves on the men’s tennis tour. Marin Cilic, all 6ft 6in of him, won his first title weeks before his 20th birthday in New Haven in 2008—though with fourth-round runs at the Australian Open and Wimbledon via top-20 players, perhaps it did not come as a huge surprise.

Before he turned 21, he had won two more titles, beaten David Ferrer at the Australian Open and knocked out Andy Murray to reach the quarters of the 2009 US Open. By the end the same year, he had beaten Rafael Nadal in Beijing and soared to No14 in the rankings, and with a semi-final run at the following Australian Open he was into the top 10—still aged just 21.

Physically I’m feeling pretty good, and this part of the season it’s important to get a lot of matches

Things would not continue so seamlessly, though. A knee injury in 2012 and a brief suspension for the incautious use of a cold remedy in 2013 took their toll: Cilic slipped to 47 in the rankings.

And thus an older—though still only 25—and wiser Cilic would have to begin his climb again. Now with former Grand Slam champion and fellow Croat Goran Ivanisevic in his corner, he reached his first Wimbledon quarter-final and then joined a very rare club: He became a Grand Slam champion himself at the US Open after a blistering, big-hitting display of straight-set wins over Tomas Berdych, Roger Federer and Kei Nishikori.

He had broken more new ground, too: a place at his first World Tour Finals and a ranking of No9, but another knock-back soon followed. He was able to play just one match before the 2015 clay season due to a persistent shoulder injury, and managed just four wins in five tournaments on what is his least successful surface.

Yet slowly, steadily he has again pressed upwards, and a quarter run at Wimbledon, the semis at the US Open, and his 14th title have augured well for this new season. He has arrived in Rotterdam, where he was a finalist in 2014, as the second seed, and upbeat about the year ahead, and in particular the indoor season. After all, seven of his titles have come indoors.

“Usually I enjoy this European part of the tour, to play indoors… I even decided to play a bit more [this year]. After last year I am still quite fresh. I feel good,” he said.

“I would say these courts suit my game—playing indoors, plus here the surface is not too fast, the ball is bouncing a bit higher, gives me a bit more freedom to play.

“Physically I’m feeling pretty good, and this part of the season it’s important to get a lot of matches to be more confident… I could have had a better start to the year, that’s for sure.”

He lost in the first round of Montpellier last week, but his target is further down the road: to regain the top 10 for the first time in more than six months. Indeed he has set himself a higher mark than that.

“I’m aiming to be top eight at the end of season. That goal would be a huge achievement. Two years ago, I think I finished No9, so I want to move one step closer. But that’s what most players want to do. The competition won’t be easy.

“Year after year, a lot of guys are playing well. I still have to be able to beat the players behind me and improve to beat the guys in front of me. It’s down to me to get that one extra step in my game, and that’s what I’m motivated to do this year.”

A few good weeks before the French Open could pile on the points after playing so little this time last year, and a win in Rotterdam could knock off a couple of places straight away.

He admitted that Ivanisevic has been a great influence on him, but knows that progress is in his own hands: “Year after year, trying to be more professional, prevent injuries, better preparation and also recovery. I’m trying to move forward and am now in a situation where I need to be able, week after week, to play good tennis at a higher level.”

He began well with a Round 1 over Denis Istomin in a testing two-setter, 7-6, 6-4, and admitted it had been “mentally tough”.

But then he was pointed to the name of the champion here exactly 20 years ago: Ivanisevic. The still-quietly-spoken Cilic admitted: “To win too would be a huge honour.”

He next plays Andreas Seppi or Gilles Muller.