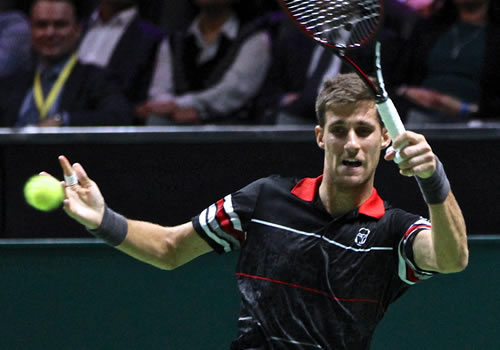 It was proving to be one of the most intriguing editions of the ABN AMRO World Tennis Tournament in its 43 years.

First it lost Roger Federer before the tournament began, then lost top seed Richard Gasquet before he had begun.

No4 seed David Goffin and No7 Benoit Paire did not make it past the first round, and then rising teenage star Sascha Zverev reached his first 500 quarter-final by putting out No3 seed Gilles Simon.

Just one seed reached the semis, an unusually calm and collected No5 Gael Monfils, playing with more consistency and focus than in many a year—which he put down to “one year older, new team, new coach, one more year with my girlfriend… everything new.”

With him was 34-year-old Nicolas Mahut, serve and volleying his way through what he considered the slowest indoor courts on the tour and into his first 500 semi-final, and that on top of reaching the finals—and subsequently the title—in doubles too.

No32 in rank and age, Philipp Kohlschreiber upset the highest seed in the draw, No2 Marin Cilic after coming back from a set down, but he could not beat Monfils.

The fourth man in the semis was as unexpected as any of them, world No43 Martin Klizan, who after three first-round losses at the start of this season, arrived in Rotterdam with a semi run in Sofia and beat some quality names here too: Tommy Robredo, Marcos Baghdatis, No6 seed Roberto Baustista Agut and then Mahut.

Extraordinarily, though, he had not just made it to the final but had saved first five match points against Bautista Agut and then three more against Mahut.

But this time, it was hard to believe he could pull off the same kind of upset, despite the evidence of his formidable left-handed firepower and the bold and confident attacking tactics he had unleashed to get this far.

The Slovak was soon under pressure in the first set, fighting off break points in a seven-minute sixth game. He almost broke through Monfils in the next game with a couple of signature forehand winners and a volley put-away, but the Frenchman survived, and he survived again after seeing a 172kph forehand rocket across court for another break point in the 11th.

The set, then, went to a tie-break, and Monfils got the first point against serve with a superb lob, and aced twice for 4-1. Klizan slammed three errors in a row, and with them the set went to Monfils, 7-6(1).

Now ‘comeback-kid’ Klizan went into action again, saving two early break points to stun Monfils in the eighth game with a fabulous forehand-drop-volley combo. The Frenchman double faulted on break point and Klizan served it out, 6-3.

And if Klizan had showed how dangerous he could be in the second set, he as good as pummelled Monfils into submission in the third with repeated winners off both wings in a blistering display. Monfils looked out of ideas as he conceded two breaks, and Klizan rubbed salt into the wound with another break in the fifth: a forehand winner to open, a lob winner to follow, a running forehand pass a la Rafael Nadal, and he was 5-0 up. Monfils had won just six points out of 26 in the set.

A rash of errors in the sixth game handed one break back to Monfils, but the respite was temporary. Klizan fired one last forehand return-of-serve winner to break for set and match, 6-1, to grab his fourth career title, and his first at the 500 level.

The Slovak credited his new team with much of this success: “I would like to say thank you to my new coach. We started only this year and it’s a great result we have made already. I cannot forget to thank my family at home… and I will never forget this moment.”

He went on: “I still couldn’t believe this can be possible after saving so many match points against other opponents. It’s an amazing feeling, amazing atmosphere.

“It was my dream to be on the board with these unbelievably great players. Every day I was just fighting. Most of the time I had three-hour matches every day, so the only thing I could do was fight.”

Klizan reached a career-high 24 last spring, and with these 500 points, he will wake up tomorrow much closer to that figure than his present 43.