Matteo Darmian was in fan mode on Monday night... 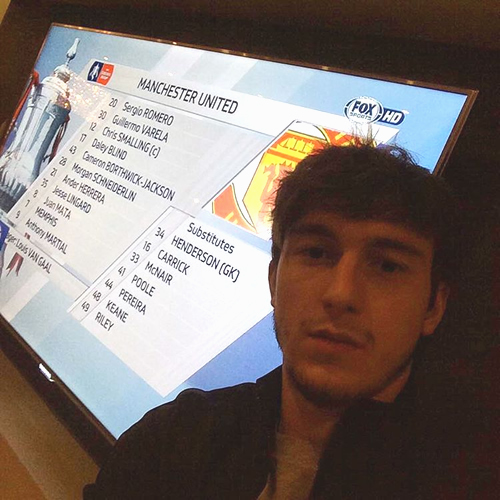 Matteo Darmian may be sidelined due to injury, but that did not prevent the Manchester United defender from assuming his duties as a fan on Monday night.

The Italian tuned in to the television at home to cheer the Red Devils on as they beat the lower league side to reach the quarter-finals of the FA Cup.

Darmian is currently sidelined after dislocating his shoulder during the Red Devils’ 2-1 loss to Sunderland at the Stadium of Light earlier this month.

However, he tuned in to watch his team-mates in action in the cup clash on Monday night.

Darmian shared the picture above on his personal Instagram account and wrote: “C’mon guys. Let’s go get the win!! #gloryglorymanunited @manchesterunited”

Darmian has made 21 Premier League appearances for the Red Devils so far this season following his summer switch to the club from Torino last summer.

The Red Devils will now take on West Ham United at Old Trafford for a place in the Wembley semi-final.