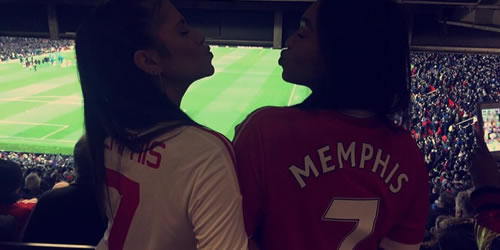 Lori Harvey was at Old Trafford on Tuesday night to cheer on her new boyfriend Memphis Depay as Manchester United beat Stoke City in the Premier League.

Depay started the game on the substitutes’ bench as Louis van Gaal’s men returned to winning ways in the Premier League with a comprehensive victory over the Saints at Old Trafford.

The 21-year-old came on to play the final 11 minutes of the 3-0 victory over the Potters.

Depay and Harvey recently revealed that they are seeing each other on social media, and the Dutchman’s partner looked happy to cheer the winger and his team-mates on during Tuesday’s clash.

And Harvey showed her support for her boyfriend by wearing a Manchester United shirt and posting the picture above on her personal Instagram account.

She uploaded the snap onto the photo-sharing app and wrote: “M7

United’s victory left them in fifth place in the Premier League table and 10 points behind leaders Leicester City, who beat Liverpool at the King Power Stadium on Tuesday night.