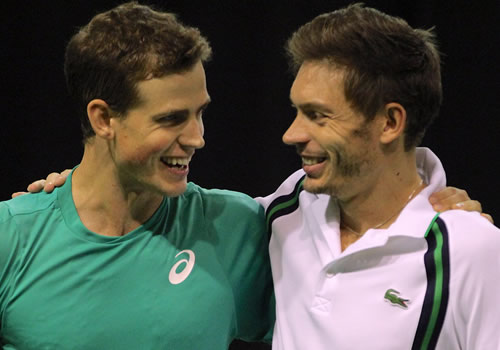 Nicolas Mahut and Vasek Pospisil are playing in the doubles in Rotterdam Photo: Marienne Bevis

Of the seven Frenchmen who appeared in the main draw on the opening day of the ABN AMRO World Tennis Tournament in Rotterdam this week, few Francophiles may have predicted the line-up come Friday’s quarter-finals.

It did not help the French cause that their star player, last week’s Montpellier champion Richard Gasquet, world No10 and this week’s No1 seed, pulled out with injury and illness before hitting ball.

Nor did it help that No7 seed Benoit Paire went out in the first round, and veteran Julien Benneteau—a finalist here in 2013 after beating Roger Federer in the quarters—drew one of the highest non-seeds, Philipp Kohlschreiber, in his opener and also lost in straight sets.

But step up another veteran—indeed the oldest man in the draw at 34—Nicolas Mahut, ranked 54 and proving as big a draw for his old-fashioned serve-and-volley game as ever.

And allowing for the relatively slow conditions on the Ahoy Arena courts, they are tactics that have borne fruit, taking the Frenchman through two rounds of qualifying and on into the quarter-finals without dropping a set.

That’s not all: He has partnered Vasek Pospisil in the doubles here, too, and within a couple of hours of beating fellow Frenchman, No28 Jeremy Chardy, he was back in action to a capacity Court 1 crowd. Mahut and Pospisil lost the first set, but stormed to a 5-0 lead in the second, levelling the match 6-2, and edged the decider from 6-6 to 10-8 in little more than an hour of lively tennis.

The win took the jubilant pair—separated by almost a decade in age—to the semi-finals and a contest against Henri Kontinen and John Peers.

Mahut’s doubles prowess has rarely been in doubt, of course. He partnered Pierre-Hugues Herbert to the US Open doubles title last year, partnered Michael Llodra to the doubles title in Rotterdam in 2014, indeed has won 10 titles from 20 doubles finals through his long career. 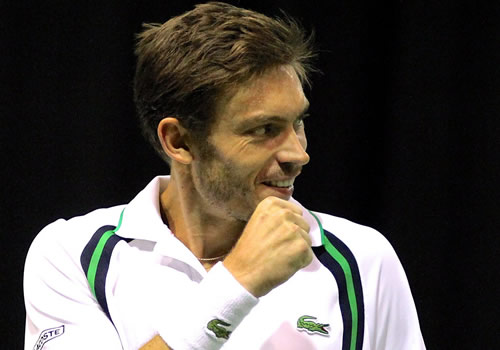 Nicolas Mahut is through to the quarter-finals in Rotterdam Photo: Marienne Bevis

Pospisil, too, is no slouch on a doubles court. He and young American partner Jack Sock shocked everyone but themselves by storming to the Wimbledon doubles title in 2014.

Singles success for Mahut, though, has been harder to come by in his 15 or so years on the tour. Perhaps not surprisingly, all three titles have come on grass, where his serve-and-volley tennis thrives. Then again, as the Rotterdam folk suggested to him, perhaps it has something to do with The Netherlands, for he has won s-Hertogenbosch twice, including last year.

Even so, Mahut has already reached the quarters on Sydney’s hard courts this year, also via qualifying, before losing to Viktor Troicki from a set up. The No22-ranked Serb went on to win the title, and reached the final in Sofia last week, too.

As luck would have it, Troicki will now face Mahut again in Rotterdam, after he beat teenage Korean Hyeon Chung in straight sets.

But with the kind of depth that France enjoys in men’s tennis, it was almost inevitable that Mahut would not be alone in the Rotterdam quarters. With 10 in the top 100, and Mahut the lowest ranked of the seven in the draw here, there was plenty of room for No5 seed Gael Monfils—who survived a three-set battle against Borna Coric—to reach the quarters.

And that put the ball in No3 seed Gilles Simon’s court to try and make it three Frenchman among the last eight.

Like Monfils, he faced one of the rising stars in the draw, 18-year-old Alexander Zverev, but the 31-year-old Simon has made the semis in Rotterdam three times before, including last year when he took out top seed Andy Murray in the quarters. And Simon reminded the tennis world, should they need it, of his resilience on a tennis court by taking Novak Djokovic to five sets in the fourth round of the Australian Open.

The winner, teenage German Zverev or Frenchman Simon, would not be decided until late into Thursday night—and he would then have to come back tomorrow night to face a rested Monfils.

Mahut, though, earned the ‘early shift’, and unlike today, will have only to play one match. If he beats Troicki, however, Saturday will be a different story: Two draws, two semi-finals. But that is surely a storyline he would have signed up to when he arrived in Rotterdam.