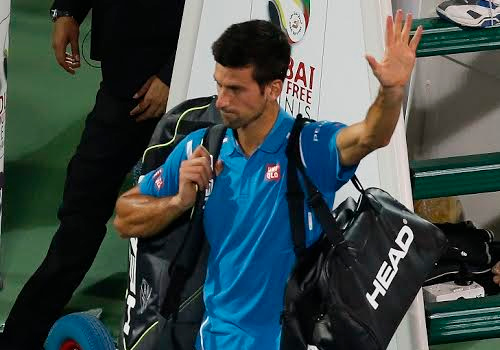 World No1 and four-time Dubai champion Novak Djokovic was forced to retire from his quarter-final against Feliciano Lopez with an eye infection after losing the first set, 6-3, on Thursday evening.

It became clear that he had an eye problem, and although Djokovic continued to play the rest of the set, he shook hands with his opponent after being broken for the opening set.

He afterwards explained: “It’s an eye problem. I have had it ever since I arrived in Dubai. Started with an infection and then severe allergy. That’s what I was told. It’s gotten worse in the last two days, unfortunately.

“It’s the first time that I have had such a problem with the eye. It was unfortunate. It was ultra sensitive today, the lights, and just wasn’t to be.

Lopez was also disappointed: “It’s very sad when you play against one of the best players in the history of the sport and he has to retire the way he did. He told me he had an infection in the eyes since a few days already. I had no idea and I just went on court without knowing about his illness.

“I felt that he was taking risks a little bit more than normal in some of the points that we played, especially when I made the break. Then he was trying to be more aggressive. Seems like he was not taking care of his shots sometimes… So that’s why I kind of realised that something was going on.

Lopez will now play Marcos Baghdatis for a place in the final.