Photo: Alex Iwobi all smiles with his friends ahead of Arsenal v Hull 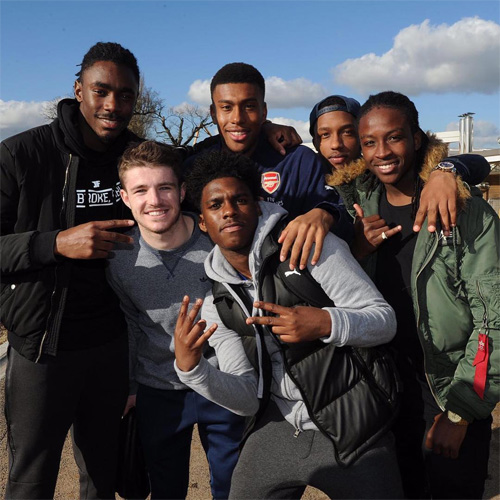 Alex Iwobi was catching up with his mates ahead of Arsenal’s FA Cup fifth-round clash against Hull City at The Emirates on Saturday.

The Arsenal youngster has been a regular fixture in the north London side’s domestic cup competitions so far this season.

Iwobi completed 67 minutes of Arsenal’s 3-1 win against Sunderland in the third round before the Nigerian lasted 71 minutes of their 2-1 victory over Burnley in their most-recent FA Cup outing.

And the 19-year-old midfielder looked relaxed as he posed for a photo with his friends ahead of Saturday’s game against Hull.

Arsenal are bidding to win the FA Cup for the thjrd successive season.

The Gunners were 3-2 winners against Saturday’s opponents Hull after extra-time at Wembley in 2014.

The north London side eased to an emphatic 4-0 win against Premier League rivals Aston Villa in the showpiece at Wembley last season.