Lionel Messi had reason to smile after firing Barcelona to a 2-0 win at Arsenal... 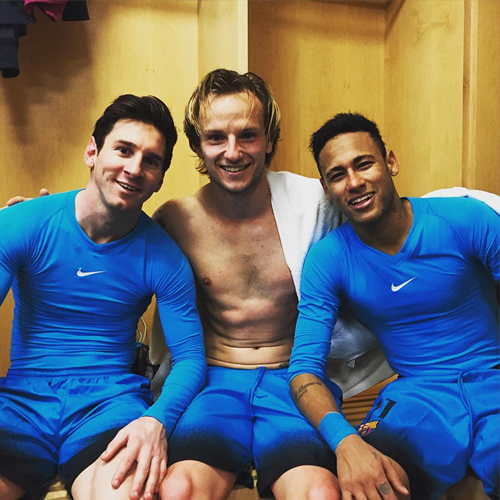 Lionel Messi was all smiles as he posed for a picture with Ivan Rakitic and Neymar after firing Barcelona to a 2-0 victory at Arsenal on Tuesday night.

The Argentina international netted twice in the second half to deal a heavy blow to Arsenal’s Champions League hopes ahead of the second leg of the last-16 tie at Camp Nou next month.

Arsenal had defender well and had chances to score up until the 71st minute, when Messi finished off a sweeping counter-attack.

Messi then doubled the visitors’ lead from the penalty spot shortly after substitute Mathieu Flamini clumsily brought down the Ballon d’Or winner in the box.

Rakitic posted the picture above on his personal Instagram account on Tuesday night after the game and wrote: “This team are huge! Great game and a good result, but there is still a second leg to be played #ForçaBarça @leomessi @neymarjr”

Arsenal, who are third in the English top-flight table, now turn their attentions back to the Premier League and their crunch clash with Manchester United at Old Trafford on Sunday afternoon.

Rio Ferdinand: Why Arsenal were naive against Barcelona