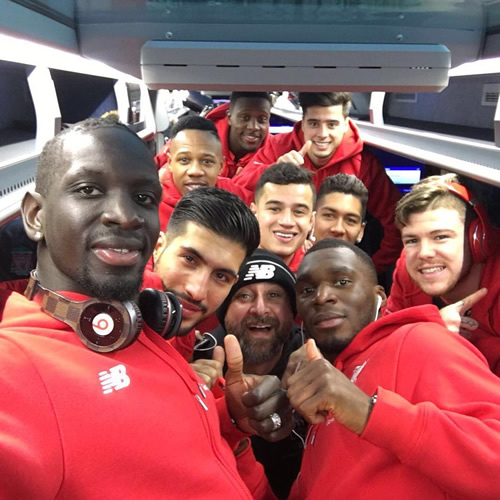 Philippe Coutinho and Roberto Firmino were both all smiles after Liverpool returned to winning ways with a thumping 6-0 win over Aston Villa on Sunday afternoon.

Reds striker Daniel Sturridge opened the scoring at Villa Park, before James Milner’s free-kick crept in to make it 2-0.

Emre Can fired in, Divock Origi slotted home and Nathaniel Clyne bundled in to add to the lead, before Kolo Toure headed in a sixth to add further gloss to the scoreline and heap misery on Villa in front of their home fans.

The result left Liverpool eighth in the Premier League table heading into the final 12 games of the season.

And Liverpool’s players were clearly in a jubilant mood after the final whistle as they celebrated the victory in their team bus on their way back to Merseyside.

Mamdou Sakho shared the picture above on his personal Instagram account and wrote: “Great win today ! Thank you for your support !! #YNWA #LFC #Liverpool”

Liverpool take on Augsburg in the last 32 of the Europa League on Thursday night.