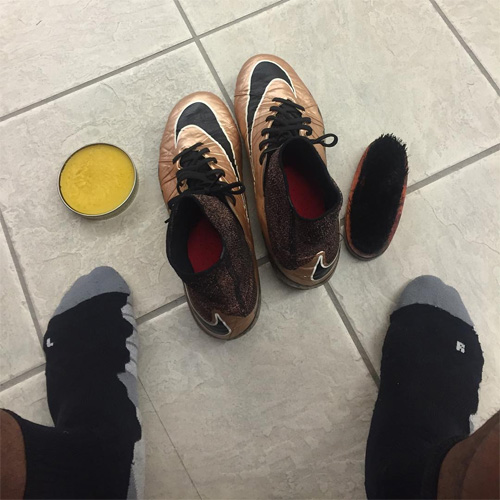 Daniel Sturridge looks to be staying grounded despite his Liverpool stardom ahead of Thursday’s Europa League clash at Augsburg.

The England striker made a goal-scoring return to Jurgen Klopp’s starting line-up on Sunday afternoon after the 26-year-old netted the Reds’s opener in a 6-0 victory over Aston Villa.

Sturridge has been criticised for his persistent injury problems over the past 18 months under Klopp and the German’s predecessor, Brendan Rodgers.

However, in a welcome sign that Sturridge is back for good, the Liverpool striker polished his Nike boots ahead of their trip to Augsburg in the first leg of their Europa League last-32 clash on Thursday night.

Augsburg take on Liverpool in their most prestigious Europa League game to date on Thursday, with Klopp returning to his native Germany for an 11th encounter with the Fuggerstädter.

Liverpool are unbeaten in Europe this season, that run including all four of their continental games under Klopp.

Photo: Alberto Moreno all smiles with Mamadou Sakho ahead of Augsburg v Liverpool