Photo: Dele Alli all smiles with Tottenham duo ahead of Fiorentina clash 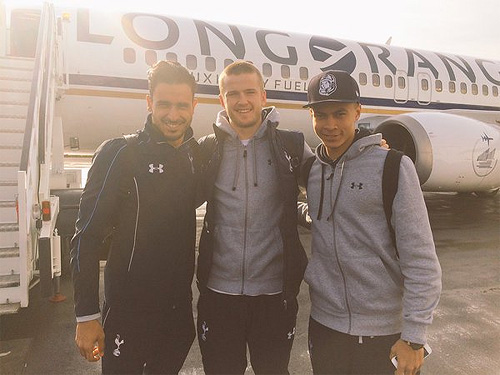 Dele Alli and his Tottenham Hotspur team-mates have plenty to smile about after underlining their title ambitions thanks to Sunday’s 2-1 win at Manchester City.

Christian Eriksen scored a late winner after Harry Kane had broken the deadlock at the Etihad Stadium with his 16th Premier League goal of the season.

Fiorentina are next up for Mauricio Pochettino’s irrepressible side as Spurs face the Serie A outfit in the first leg of their Europa League last-32 tie in Florence on Thursday night.

Alli, Nacer Chadli and Eric Dier posed for a photo which Tottenham posted on their Twitter account ahead of their flight to Italy on Wednesday afternoon.

Vincenzo Montella’s Viola drew 1-1 at White Hart Lane in the first leg before eliminating Pochettino’s Spurs with a 2-0 win in Florence.