Photo: Firmino, Sakho all smiles after Liverpool’s 1-0 win against Augsburg 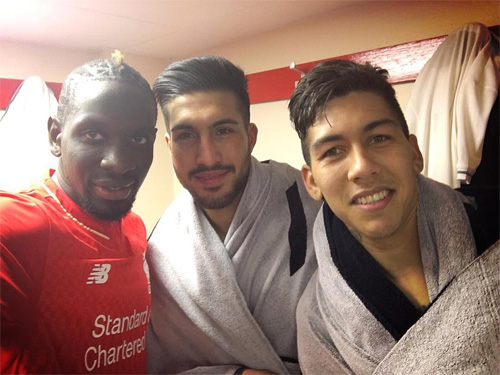 Mamadou Sakho was all smiles with Roberto Firmino and Emre Can after Liverpool booked their place in the Europa League last-16 draw on Thursday night.

England international James Milner scored a fifth-minute penalty to give Liverpool a 1-0 lead on the night and on aggregate after a stalemate in the first leg in Germany.

The Reds were unable to double their advantage despite Philippe Coutinho, Jordan Henderson and Daniel Sturridge all having decent chances at Anfield.

Jurgen Klopp’s side managed to hold on despite a nervy finish to book their place in Friday’s Europa League last-16 draw.

And Sakho posed for a dressing room selfie with Can and Firmino following their latest European triumph.

The Reds are in eighth place and nine points behind Manchester City in the Premier League table in the race to secure a spot in next season’s Champions League.