Photo: Gilberto Silva all smiles with Arsene Wenger ahead of Arsenal v Barcelona 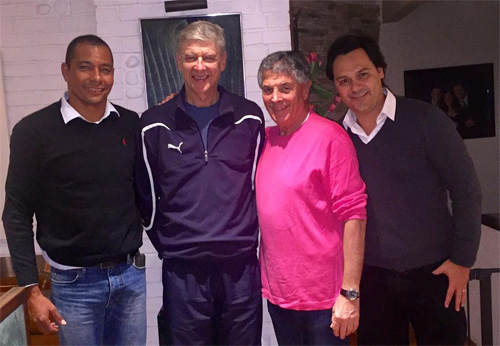 Gilberto Silva caught up with his former manager Arsene Wenger on Monday night ahead of Arsenal’s Champions League clash against Barcelona.

The former Brazil international spent eight seasons at the Emirates Stadium and was part of Wenger’s much-lauded Invincibles side in 2004.

The retired Arsenal No19 started the north London side’s 2-1 defeat by Barcelona in their only Champions League final appearance in Paris in 2006.

The South American posted the above snap with his former manager Wenger and ex-Arsenal chairman David Dein on his Instagram page on Monday night.

Gilberto wrote: “New projects and major partnerships are born of hard work and a good chat with friends. And tomorrow is the game, let it go.”

Presumably Wenger would dearly love to have Gilberto in his current side ahead of the first leg of their last-16 clash against Barcelona given the continued absence of Francis Coquelin and Santi Cazorla.

Gilberto scored 24 times in 237 appearances in all competitions during a six-year stay at the north London club.

The Brazilian won the Premier League, the Champions League and two FA Cups during his Gunners career.