Photo: Liverpool signing poses with Jordon Ibe ahead of flight to Germany 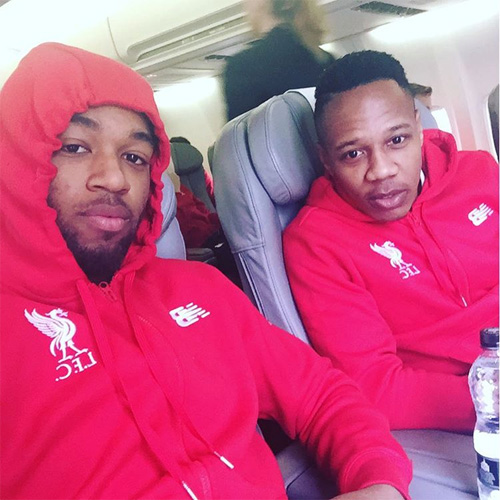 Jordon Ibe posed for a selfie with Nathaniel Clyne ahead of Liverpool’s flight to Germany on Wednesday.

The Reds make the trip to Augsburg fresh from an impressive 6-0 win against Aston Villa at Villa Park on Sunday afternoon.

Clyne scored his second goal for the Merseyside outfit since his £12.5m deal from Southampton in last summer’s transfer window.

Ibe has scored three times in all competitions this season, including the winner in a 1-0 victory over Rubin Kazan in the Europa League.

The Liverpool pair looked in good spirits as the Reds prepared to jet off to Germany ahead of their Europa League last-32 tie on Thursday night.

Liverpool’s record in 32 games against German teams is won 15, drawn 11 and lost six.

They won their first European trophy by beating VfL Borussia Mönchengladbach in the 1973 Uefa Cup final and overcame the same opponents in the 1977 European Cup decider.