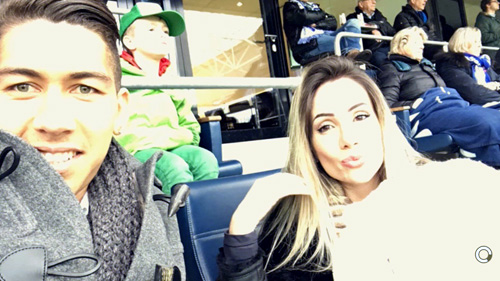 Roberto Firmino returned to Hoffenheim on Saturday as the Liverpool midfielder enjoyed a rare weekend off.

The Brazil international was unable to inspire Liverpool to victory on Thursday upon his return to Germany as the Merseyside outfit drew 0-0 with Augsburg in the first leg of their Europa League last-32 clash.

Liverpool aren’t in action again until the return leg at Anfield next Thursday before the Reds face Manchester City in the League Cup final at Wembley three days later.

And Jurgen Klopp appears to have given his players a few days rest and recuperation following a demanding schedule over recent weeks.

Firmino was in the stands to watch his former side Hoffenheim play Mainz 05 in the Bundesliga on Saturday afternoon.

The Brazilian has scored six goals and has made six assists in 24 Premier League appearances so far this season.

Firmino moved to Liverpool from Hoffenheim in a £29m deal last summer.