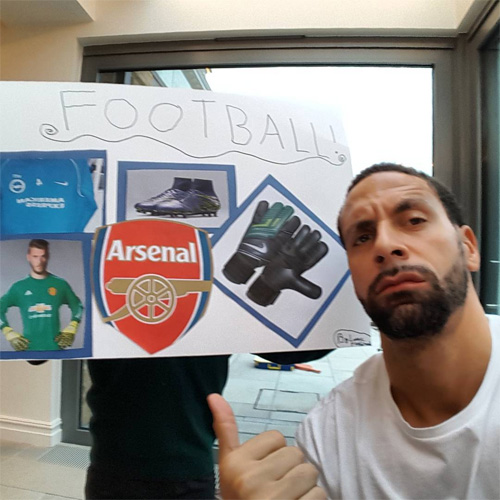 It is every Manchester United supporter’s worst nightmare.

Usually your kids follow the same route as their elders, but Rio Ferdinand appears to have a big problem on his hands.

The retired England defender is still a huge Manchester United supporter after a decorated 11-year career at Old Trafford.

However, his son appears to have developed a soft spot for Arsenal judging by Ferdinand’s latest Instagram post.

Ferdinand posted the above photo on the photo-sharing app and wrote the following caption: “What is that doing on my boys poster!??! Said he doesnt support em but wants to play for them at the Emirates😤”

Given the Gunners’s current status as Premier League title contenders and United’s continued penchant for turgid football, perhaps it is no surprise that Arsenal are a much more appealing option.

However, Ferdinand will be hoping a United victory over Arsene Wenger’s side at Old Trafford on Sunday afternoon can persuade his son to stay true to his father’s roots.

Per Mertesacker sends warning to Man United ahead of Arsenal clash