Photo: Marcos Rojo all smiles with daughter ahead of Shrewsbury v Man United 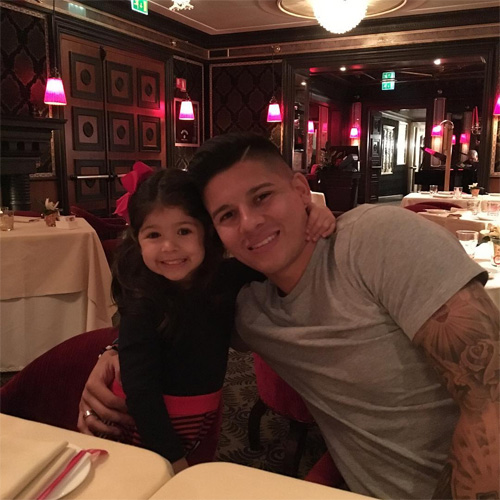 Marcos Rojo appeared in high spirits on Sunday night despite his injury nightmare as the Manchester United defender enjoyed family with his dinner.

The Argentina international hasn’t featured for the Red Devils since a goalless draw with PSV Eindhoven in the Champions League in November.

Rojo required surgery on a dislocated shoulder, which is a problem that has blighted his United career so far.

However, the 24-year-old’s daughter Morena looked to keep her famous dad smiling during dinner on Sunday night despite his injury woes.

Rojo’s wife Eugenia Lusardo posted on her Instagram page: “Dinner with the loves of my life”

The former Sporting Lisbon defender has been limited to five Premier League appearances this season following an injury-hit campaign.

Louis van Gaal’s side face Shrewsbury Town in the FA Cup fifth round on Monday night.